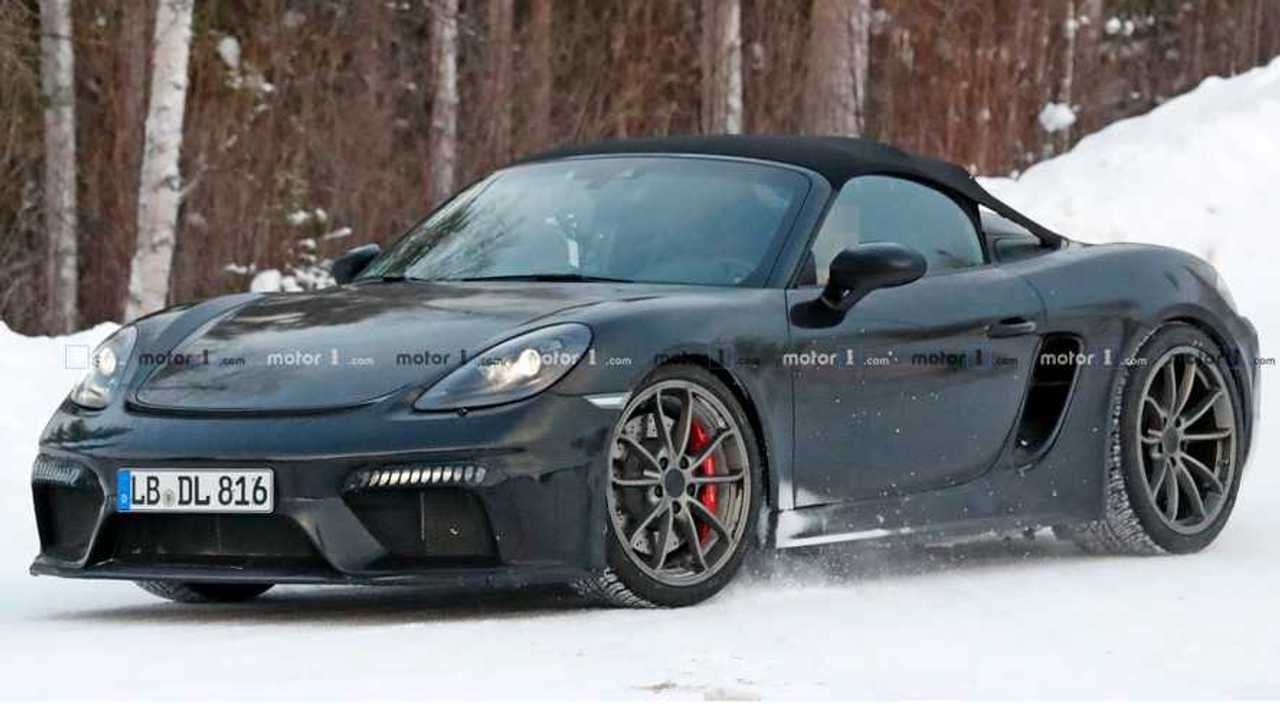 There's also something weird about seeing a roadster in the snow.

After months of testing already, Porsche continues to evaluation the 718 Boxster Spyder, and this time the roadster moves to a chillier climate for cold weather prep. We can't imagine that most owners would take the hardcore model in the snow like this test mule, but the German engineers are making sure the model can take an icy beating if a buyer gets cabin fever and decides to take the Spyder our in a blizzard.

The Boxster Spyder is the open-roofed counterpart to the Cayman GT4 as the range-topping performance variants in their respective lineups. They share the same mechanical parts, but the Boxster sports a bikini-style top and sculpted nacelles on the rear deck.

The recent launch of the 718 Cayman GT4 Clubsport throws a wrench in our speculation about the Boxster Spyder's drivetrain. The track-spec coupe uses a 3.8-liter flat six making 420 horsepower (313 kilowatts) and 314 pound-feet (425 Newton-meters). However, previous rumors and speculation indicate the road-going Cayman GT4 and Boxster Spyder might use a detuned version of Porsche's 4.0-liter flat-six from the GT3. Even in the larger displacement mill isn't for the pair, the 3.8's output still beats the 2.5-liter turbocharged four-cylinder in the GTS trim that makes 365 hp (272 kW), although the 317 lb-ft (430 Nm) of torque is a bit better.

The lack of any teasers hints that the Cayman GT4 and Boxster Spyder aren't debuting at next week's North American International Auto Show. Instead, we'd expect a public premiere at the Geneva Motor Show in March and an online reveal slightly before that. Sales would begin before the end of the year.

As the range-topping models, the Cayman GT4 and Boxster Spyder will carry a high price to match their increased performance. If you're looking for a less expensive but still driver-focused version of these models, take a look at the new T variant of the siblings. While power is significantly lower at 300 hp (224 kW) from a 2.0-liter turbo, they come with enthusiast-oriented standard features like adaptive dampers and a torque-vectoring rear differential. Buyers can even choose to ditch the infotainment display for a storage area in the center of the center stack.