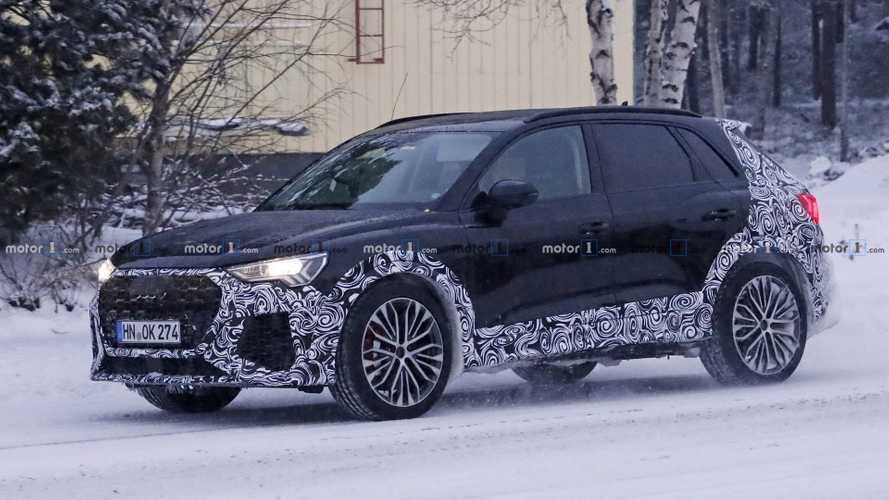 The performance crossover is putting its five-cylinder engine to work in Sweden.

Rather than coming out with an S1/RS1 Sportback as hot hatch enthusiasts would’ve wanted, Audi Sport is focusing on crossovers for its forthcoming model onslaught. An SQ2 was released last year in Europe and spy shots have shown there’s going to be an SQ8 followed by an RS Q8 at the upper end of the lineup. The go-faster division formerly known as Quattro GmbH is also working on a new RS Q3, which our spies currently based in chilly Sweden have spotted undergoing testing.

The camouflaged slapped onto the body is a bit pointless since we can easily see the range-topping variant of the compact crossover will have a much more aggressive front bumper with big air intakes. At the sides, bulging wheel arches further denote it’s not a run-of-the-mill Q3, while the pair of oval exhaust tips at the back emphasizes the RS treatment Audi Sport is applying to its Mercedes-AMG GLA 45 rival.

Contrary to original reports suggesting the five-cylinder engine would produce 400 horsepower, Germany’s Auto Bild magazine has it on good authority the engineers have found a way to extract more muscle from the turbocharged 2.5-liter unit. It is believed the RS Q3 will push out as much as 420 PS, which works out to 414 horsepower. It’s not all that surprising considering the Mercedes-AMG A45 S will pack a very similar 416 hp from its new 2.0-liter engine, so we’re expecting an identical power output from the GLA 45 S.

It will be a while before Audi is going to take the wraps off the RS Q3 taking into account we haven’t even seen the warm SQ3 yet. I mean, we have spy shots, but the spicy crossover has not been officially revealed. It could happen in March at the Geneva Motor Show, which could mean the mighty RS will arrive towards the end of the year.