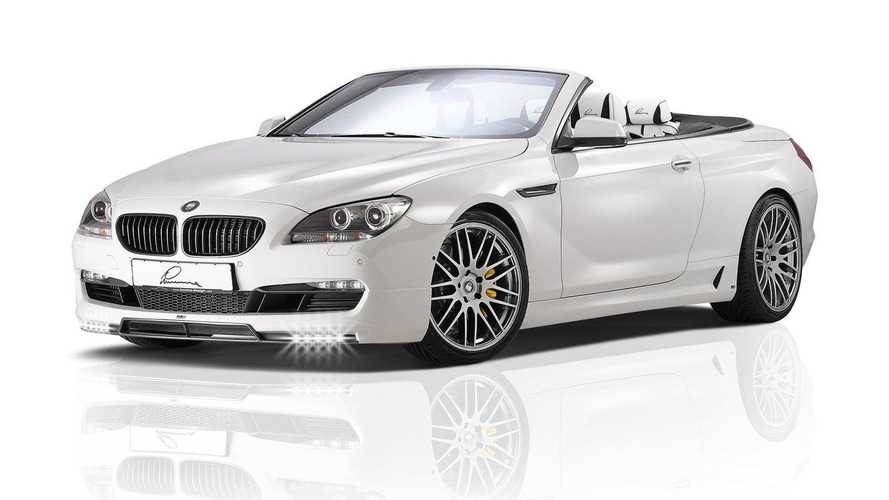 German tuner Lumma Design has announced their CLR 600 GT based on the 2012 BMW 650i Cabriolet (F12) will make its debut at the Geneva Motor Show next month.

German tuner Lumma Design has announced their CLR 600 GT based on the 2012 BMW 650i Cabriolet (F12) will make its debut at the Geneva Motor Show next month. It wasn't long ago that Lumma showed us their styling for the previous generation BMW 6-Series Cabriolet E64, but already the BMW/Porsche specialist from Germany has already developed a comprehensive tuning package for the 2011 F12 model.

On the outside the CLR 600 GT features an aerodynamic body kit consisting of a front bumper lower spoiler with LED daytime driving lights, side skirts and rear diffuser. Suspension is lowered by 20mm and GTB-Monoblock 9 and 10.5 x 20-inch wheels round out the look.

Under the hood, the 6er Cab with its 4.4-liter twin turbo V8 makes 490 HP (360 kW) compared to the standard 408 HP (300 kW). Torque also increases from 600 Nm (443 lb-ft) to 720 Nm (531 lb-ft). Lumma hasn't provided details on what they did to increased power, but we can guess that upgrades include a reprogrammed control unit module, air intake and a flow-optimized sport exhaust system.

As seen in the photos, the interior can get quite dramatic too as Lumma has given the cabriolet a hand-crafted upholstery with alcantara and leather throughout. There's also an ergonomically shaped sports steering wheel, aluminum pedal set and velour floor mats.