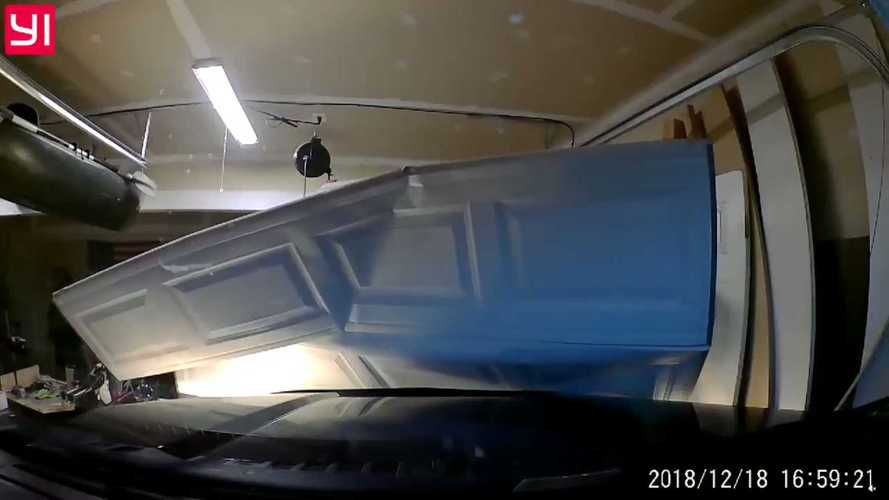 We have nothing but smiles for this video, which recently appeared on Reddit and is currently quite a hot topic. To clarify that a bit further, we’re not laughing at this young driver. Every single one of us started life with zero experience behind the wheel. Rather, we’re smiling at this slice-of-life moment that, while clearly traumatic at the time, will no doubt become a lifelong memory that could even be cherished. Especially since it’s captured on film.

What exactly happens here? It’s pretty cut-and-dry actually; the young man behind the wheel apparently confused the gas and brake pedals as he approached the garage. According to the time stamp on the video this happened back on December 18, and though we don’t know where it happened, it’s safe to say Santa Claus delivered a new garage door for this family’s Christmas.

It Could've Been Worse:

Sleepy BMW Driver Spectacularly Crashes Into The Top Of A Tunnel

It’s hard to see what was in the garage that might’ve been damaged, but looking closely at the video it appears the door could be the only casualty. We don’t see anything resembling a garage door opener either, so as long as the rails aren’t too twisted, it could be a fairly simple fix. As for the vehicle, we have no idea what the front looks like, but given the way the garage door folded upon impact, any damage might literally buff right out.

Was it a bonehead move? Sure, but we’ve all made such bonehead moves in our driving careers. At least this one came early on and was a legitimate accident as opposed to actually deciding to do something stupid, like, say, driving through a flooded icy street or going 98 mph in a school zone.

The Reddit post is full of interesting advice for this youth, but we’ve got nothing but support for the lad. Here's our bit of advice: you had a fender bender, you apologized, and hopefully you gained some experience in the process. We’ve all been there – every single one of us. Don’t sweat this one; you’ll be laughing about it soon enough.

That is, unless you wreck the replacement door too.