Sleepy BMW Driver Spectacularly Crashes Into The Top Of A Tunnel

Somehow, he survived without any serious injuries.

One of those crashes that you have to see to believe, the 44-year-old driver of a BMW had an unexpected close encounter with the top of a tunnel. Yes, he crashed into the upper area of the tunnel like in Burnout Paradise, and surprisingly, he wasn’t intoxicated. Proof that driving while tired can be just as dangerous as a DUI, the Slovakian fellow effectively turned his car into a catapult.

Footage recorded just before 5 AM on December 20 at Bôrik Tunnel near Poprad in the Slovak Republic shows the car veering to the right side of the road ahead of the tunnel’s entrance. According to preliminary reports, local police say the driver had probably fallen asleep. He hit an elevated piece of concrete, which basically served as a ramp.

Upon impact, sparks start to fly, and we can say the same thing about the car. The BMW crossover, which appears to be an X1, smashes into the top of a tunnel and comes crashing down while doing a 360-degree spin in the process. Amazingly, it lands on all four wheels facing the direction of the road. Although images of the aftermath look downright scary, the driver escaped without any serious injuries and his life isn’t in any danger.

It’s unclear how fast he was going, but his guardian angel saved him since he’ll live to see another day. That guardian angel’s name is Bayerische Motoren Werke as the nasty accident goes to show how far cars have come in terms of safety taking into account an impact as brutal as this would’ve meant certain death a few decades ago. 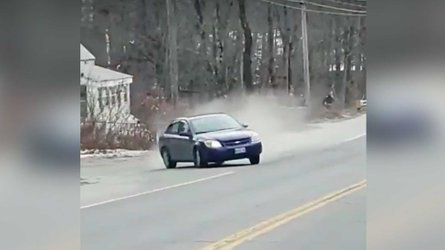 Man Films High-Speed Chase That Crashes Into Him
⠀ 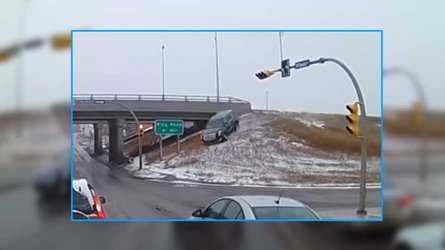 Cadillac Escalade Careens Off Embankment In Crazy Crash Video
By: Adrian Padeanu
++
++
Got a tip for us? Email: tips@motor1.com