The cars have similar performance on paper, and the racing action doesn't disappoint.

A fresh video is out from our friends at DragTimes, and we’re stoked to share it. We see lots of drag racing action, but a new Ford GT lining up against a Lamborghini Aventador isn’t your typical Friday night test-and-tune contest. That’s exactly the kind of action we’re treated to this time around.

Actually, there’s an entire fleet of awesome supercars on hand, not the least of which being a McLaren 720S and a Lamborghini Huracan. There’s mention of a Bugatti Chiron showing up as well, but the video focuses on the two cars pictured above. Not that that’s a bad thing by any stretch.

When Supercars Battle, Everyone Wins: 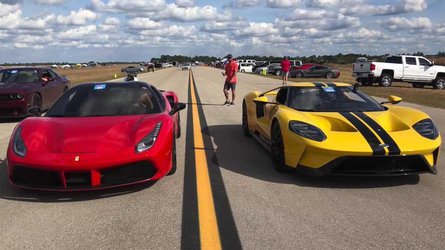 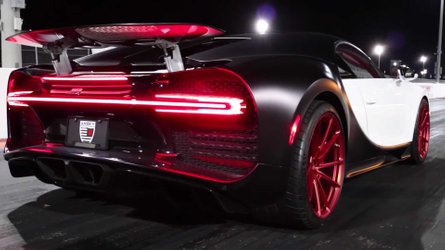 Both supercars are factory stock, and on paper they match up pretty darned close. The Lambo checks in with its big 6.5-liter V12 making 700 horsepower (522 kilowatts), sent to all four wheels through a single clutch gearbox. The Ford GT’s mill has half the cylinders and nearly half the displacement, but two turbos help the 3.5-liter V6 make 647 hp (482 kW). In the Ford, that power goes strictly to the back wheels through a seven-speed dual-clutch transmission. The power disparity is equaled out by weight, with the Ford GT being lighter by 300 pounds (136 kilograms).

Before lining up, the Ford GT made a couple timed solo quarter-mile passes and clicked off an impressive 10.85 at 131 mph. VBox data showed a zero to 60 time of 3.1 seconds, so the rear-wheel-drive GT was certainly getting a good bite off the starting line.

For the actual side-by-side racing, the Lamborghini driver didn’t want to “mess with the clutch” according to the video, so the cars went from a roll at the starting line instead of a stationary launch. That’s a bit unfortunate as it would be quite interesting to see these supercars launch from a dead stop, but the roll races are still pretty darned close.

We’ll let the video reveal the outcome, but our screenshots probably tell the tale. Perhaps the Aventador should’ve challenged from a dig after all.