Mercedes-AMG A35 Sedan And A45 Hatchback Seen In Traffic

The A35 Sedan will become the cheapest AMG model in the United States. 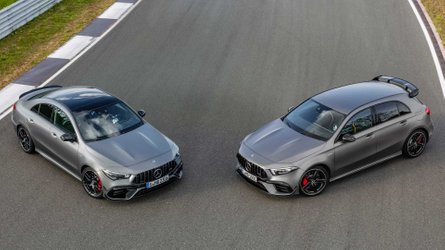 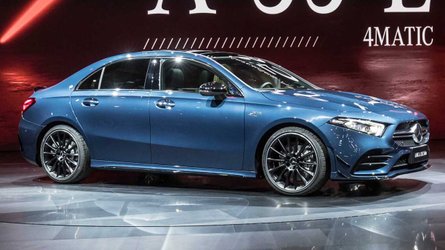 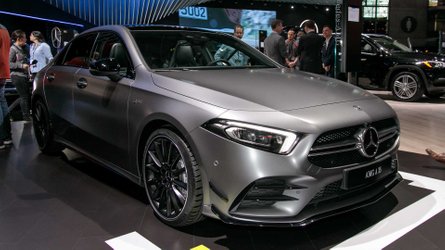 2020 Mercedes-AMG A35 Sedan Debuts, Sets It Sights On America

“AMG all the things” seems to be the motto these days at Mercedes HQ as with the exception of very few models, such as the B- and V-Class minivans and X-Class pickup truck, just about all other models have been amped up by the Affalterbach squad. Having seen the first-ever A35 five-door hatchback, it’s only a matter of time before this A35 Sedan prototype will drop the camo to reveal all of its production metal.

Unlike the hot hatch, the A35 Sedan is heading to the United States and will feature a turbocharged 2.0-liter gasoline engine producing 302 horsepower and 295 pound-feet (400 Newton-meters) of torque. It will fight Audi’s S3 Sedan and is going to come as standard with 4Matic all-wheel drive and a seven-speed, dual-clutch automatic transmission. Performances should mirror those of the hatchback, so look for the sprint to 62 mph (100 kph) to take 4.7 seconds en route to an electronically governed top speed of 155 mph (250 kph).

The sedan will obviously lack the hatchback's roof-mounted big wing at the back, but surely Mercedes-AMG has figured out a way to make the four-door model look more aggressive. A subtle trunk lid spoiler should do the trick. The prototype caught out and about in Germany lacks the production version’s more aggressive dual exhaust system and the sportier rear bumper with a diffuser between the two tips.

As for the A45 hatch seen in the spy video below, it will continue to be a forbidden fruit in the U.S. However, the good news is we’ll be getting the sedan to serve as a cheaper alternative to the CLA 45, which in its outgoing form starts off at $53,100. Mercedes has been eager to share many details about the new mega hatch, so the following juicy specs can be safely applied to the sedan as well.

The heart and soul will be a newly developed 2.0-liter turbocharged engine pushing out in excess of 400 horsepower to beat the Audi RS3 Sportback / Sedan. AMG has also come up with a dual-clutch, eight-speed automatic gearbox and a new 4Matic setup that will allow drivers to drift the car. As per a statement made earlier this year by Dominik Greuel, Senior Manager Marketing Communications at Mercedes-AMG, there’s going to be an even hotter A45 S. It’s unclear in which forms it will be offered, but the hatchback (at least) is an educated guess.

The A45 is slated to premiere at some point next year, presumably first as a hatchback and then as a sedan. Naturally, there will eventually be a new CLA 45, a GLA 45, and perhaps even a GLB 45.