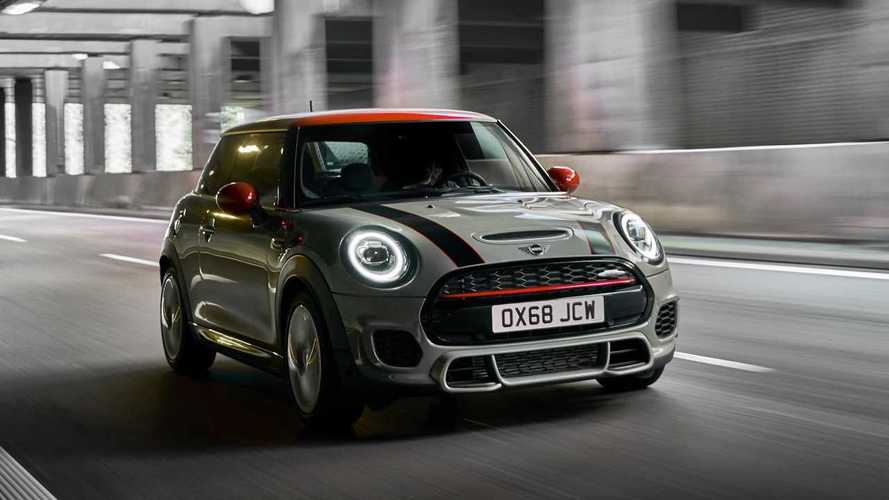 Christmas has come early for Mini fans – for those in Europe, at least. The classics British carmaker has tweaked its range-topping John Cooper Works for 2019 to make it not only quicker and better looking, but with the addition of a particulate filter integrated into the sports exhaust system to meet European emissions, cleaner, too.

Better efficiency doesn’t necessarily equate to less power, though. Even with a healthy 40.9 miles per gallon with a manual, and as much as 46.3 miles per gallon with the automatic on the European scale, this Mini maintains its "distinctively sporty sound" and characteristics, the company says.

The European JCW still produces 228 horsepower (170 kilowatts) and 236 pound-feet (319 Newton-meters) of torque courtesy of a 2.0-liter turbocharged inline-four engine. Buyers can choose from either a six-speed manual or an eight-speed automatic, and no matter which gearbox you go with, the JCW hardtop is good for a 60 mile-per-hour (96 kilometers per hour) sprint in the low six-second mark. The soft top shaves off about 0.3 seconds off that time.

Most of the major updates are under the hood, but there is one thing that has changed on the exterior. Note the Union Jack taillights, which are new for 2019. Buyers can also now choose from high-gloss headlights and a Mini logo puddle lamp. Otherwise, most of the same styling carries over, apart from some minor changes to the fascia and wheel options.

Inside, amenities like a wireless charging pad and updates to the infotainment system make this Mini JCW a bit more tech-friendly. There’s also an option for piano black trim pieces with LED back-lit accents, and new JCW bucket sport seats.

Orders for the new Mini JCW begin early in 2019 – but there’s not word on pricing yet. Cars should start showing up to European dealers by March. American buyers will have to wait a bit longer.

New customization options are the interior equipment feature MINI Yours Interior Style Piano Black illuminated including the back-lit trim area on the front passenger side and the Piano Black Exterior option with high-gloss black surrounds for the headlamps, the rear lights and the radiator grille. The latest additions to the range of options and accessories include the telephony option with wireless charging, the MINI logo projection on the driver’s side, the customizable products of the MINI Yours Customized range as well as numerous MINI Connected digital services.
Fuel consumption, CO2 emission figures and power consumption were measured using the methods required according to Regulation (EC) 2007/715 as amended. The figures are calculated using a vehicle fitted with basic equipment in Germany, the ranges stated take into account differences in selected wheel and tyre sizes as well as the optional equipment. They may change during configuration.

The information has already been calculated based on the new WLTP test cycle and adapted to NEDC for comparison purposes. In these vehicles, different figures than those published here may apply for the assessment of taxes and other vehicle-related duties which are (also) based on CO2 emissions.