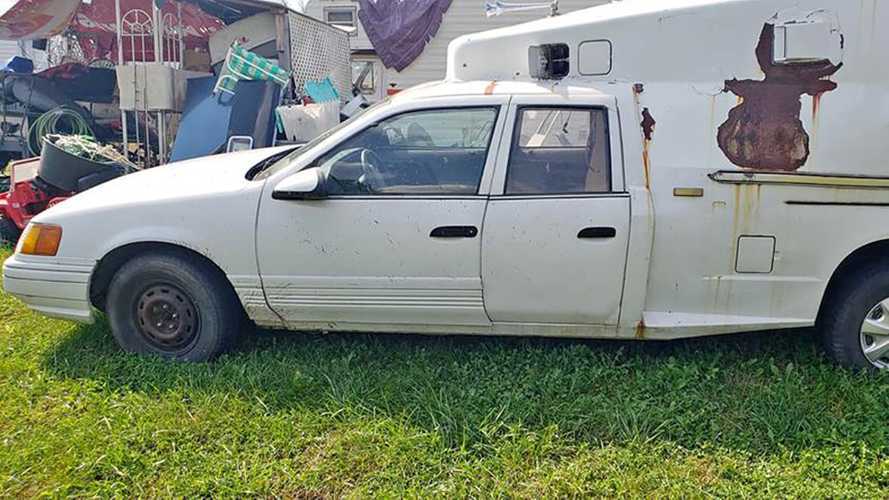 It's for sale too, and we kinda want it.

Update: We heard back from the seller, who offered a bit more info on this creation. He's not sure exactly when it came to life as he's not the mastermind, but he does know the original builder passed away in 2002. There's certainly lots of fabrication involved, and we also have a few pictures of the inside to share in the gallery below. It's definitely a project vehicle, but there's all kinds of room inside for a crazy custom interior.

It’s confession time. There are a couple Motor1.com staffers who have a serious soft spot for the first-generation Mercury Sable, and once you read this article you can probably guess who one of them is. Don’t judge – automotive passions are seldom logical. For that matter, building a freaking massive camper from a 1986 Sable isn’t logical either, but we still want it. Sweet daisies on Saturn’s rings do we want it.

Fortunately (or not, depending on your point-of-view) it’s for sale. We blame thank Jalopnik for finding this gem, currently listed in Facebook Marketplace at a very tempting price of $1,500. The seller is a gentleman named Bill Harris from Falmouth, Kentucky and yes, and we’ve sent him a message asking for more info on this ride because the description is a bit thin. No, we’re definitely not buying it. Probably.

Crazy Toyota HiAce Van Has A Functional Sauna In Back
⠀

In the meantime, we’ll bow to David Tracy over at Jalopnik who already gleaned a bit of extra information. Yes, that’s a bonafide first-generation Mercury Sable – in fact, it’s the very first year the rounded Mercury was offered. It’s front-wheel drive, and at this point we’ll assume there’s a 3.0-liter V6 under the hood. A four-cylinder was offered, but it was exceedingly rare in the up-market Sable versus its Ford Taurus stablemate. And check out that big Sable light bar across the front; it looks like it's in good shape and that's a super-rare part to find. See? We weren’t kidding when we said soft spot.

Obviously there’s more to this creation than just the Sable. According to Jalopnik, the seller said the back has a rear-end from a Chevy as well as a trailer axle, and the top is made from a pair of ‘80’s Ford Bronco II toppers. Actually, looking closer it appears the baby Broncos were cut halfway down the side and welded to the monster, taillights and all. Sable and Bronco II? This build just keeps getting better.

Judging by the photos the crazy camper has seen better days, but it apparently runs and drives well. The sales description says it needs to be done inside, so despite the appearance, it may not have any of the camper amenities we’d like to see. That just means we can fill it up with carpeting, some ‘80’s art deco paintings, a 19-inch color TV with rabbit ears, and an original 8-bit Nintendo. Bean bags make great chairs/beds, too.

We can’t imagine finding anything more crazy for $1,500 than this Frankenstein camper. Time to sell the current project car.