2020 Porsche 911 Convertible Spied With Its Top On

Despite having its top up, this 911 is almost completely naked.

A new Porsche 911 coupe begets a new 911 convertible, and our intrepid spy photographers got our best look yet at what the new soft-top sports car will look like. And predictably, it looks a lot like a 911 coupe with a cloth roof. That’s no bad thing given the all-new 992-series 911 wowed us with its fat haunches and low-slung looks at the 2018 Los Angeles auto show. 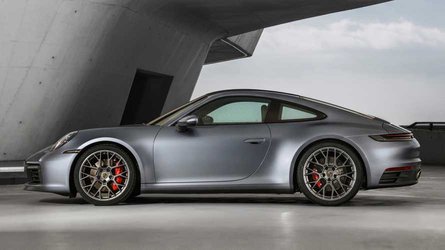 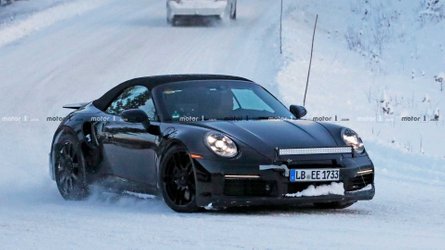 Surprisingly, these spy shots have us thinking the convertible will actually best the coupe as the better-looking member of the 911 family. Look at the way the low-slung fabric roof gently merges with the rear tonneau cover and retractable rear wing, take in the B-pillarless bodysides, and drink in the tonneau’s cutlines emphasize the car’s girthy hips. Only a handful of pieces remain covered in camouflage, and we can use our imaginations to fill in the few gaps the black tape creates.

Like its coupe counterpart, we expect the 911 convertible to come to market in high-horsepower Carrera S guise, with the less-powerful Carrera model following shortly thereafter. Look for the same 443 horsepower (330 kilowatts) to flow from the rear-mounted twin-turbocharged 3.0-liter flat-six to the car’s rear wheels by way of an eight-speed dual-clutch automatic transmission. An all-wheel-drive Carrera 4S is all-but guaranteed to join the convertible's ranks, as is a seven-speed manual gearbox.

We anticipate the drop-top 911 Carrera S will wear a sticker price that’s more than $10,000 greater than that of its $113,300 coupe counterpart. Look for the 911 convertible to debut in 2019 with sales starting shortly thereafter.

10 Photos
Photo by: Automedia
By: Greg Fink
++
Got a tip for us? Email: tips@motor1.com