Spy photographers nabbed photos of the new cruiser in action, complete with spotlights and Interceptor badging.

New spy photos are out of the next-generation police cruiser from Ford – AKA the Explorer – and they give us our best look so far at the crime-fighting machine. Not that we didn’t have a good look before – the cruiser was last seen in August sporting massive Police Interceptor branding overtop its camo cover, but now we can see badges, spotlights on the mirrors, and what appear to be built-in LEDs behind the grille for making those traffic stops extra bright. 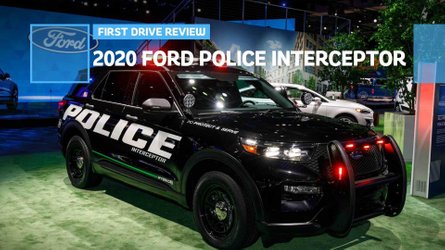 Of course, the cruiser is built from the next-generation Ford Explorer SUV, and we’ve seen the civvie version running around with thin camo as well. The police variant obviously sticks with steel wheels and provisions for extra lights, but it will also have the added benefit of 75-mph rear impact protection. We’re not sure exactly how that works yet, but with cruisers often parked on highway right-of-ways, it could certainly give an extra layer of protection to officers inside.

The new Explorer design isn’t revolutionary, but it does add a bit more attitude to the SUV’s swagger. Sharper lines – especially at the C-pillar and further back at the D-pillar – convey a sportier design. The new grille and headlights will shrink somewhat compared to the current model, but the face as a whole should still look familiar to Blue Oval buyers.

Under the new cop car’s hood will be a hybrid powertrain, details of which we don’t yet have. Ford has said, however, that the new setup will offer better acceleration and significant fuel economy increases compared to the outgoing V6 model. That said, we do know a new high-performance Explorer ST is coming and it could have over 400 horsepower (298 kilowatts) from a twin-turbo V6. Previous police vehicles from Ford have offered higher-hp engine options, so it’s not outrageous to think something similar could happen with the new Explorer as well.

We’ve seen both the police and civilian versions of the Explorer out and about for quite awhile now, so we expect a reveal is coming soon. We haven’t heard an exact date yet, but sometime in the first quarter of 2019 is a strong possibility.