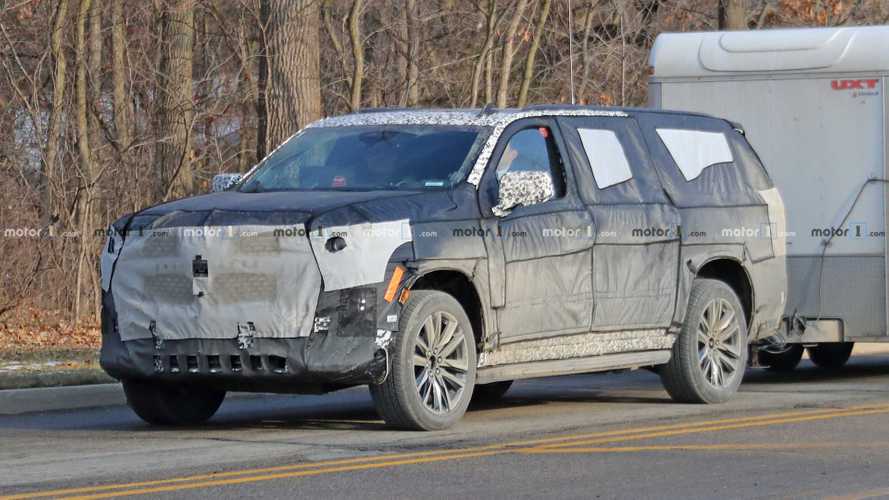 A standard model and extended ESV were caught in a convoy, and they're still huge.

General Motors has given us all-new full-size pickup trucks for Chevrolet and GMC. Cadillac doesn’t build a truck, but the Escalade is every bit as big and now we’re getting our first look at the next-generation SUV. Or rather, we’re getting our first look of something chunky and expansive with four wheels and heavy coverings from stem-to-stern. Clearly, Cadillac is hoping to keep things secret for awhile longer.

How do we know there’s a Caddy under all that fabric? The grille is a dead giveaway, visible behind the white covering but still identifiable as the company’s new mesh design as seen on the XT4 crossover. Even then, we suspect some additional trickery is at play because the crosshair look of the camouflage is very Ram-like, but we’re not fooled. We can also suss out some design changes to the headlights, which should also follow the XT4’s design direction with more of a horizontal orientation in place of the blocky vertical design.

Other design changes we can spot include new rectangular exhaust outlets at the back, but other details are not so easily spotted. We think the taillights will stay down low with a long-tall look, and the backside appears as square as ever. Specific body lines, however, are still well-covered.

Furthermore, we don’t have any preliminary information on powertrains, though a hybrid arrangement is virtually guaranteed at some point. Right now you can order the Escalade with a familiar 6.2-liter V8 producing 420 horsepower (313 kilowatts) connected to a 10-speed automatic. That engine could carry over, or Cadillac’s new 4.2-liter twin-turbo Blackwing V8 could be called to duty. With GM’s recent announcement of layoffs casting doubt on the CT6 sedan’s future, the new mill could be a good fit for the big SUV.

With this being our first look at the standard Escalade and longer ESV model, a reveal isn’t expected soon. We believe this is a 2020 model, which would likely put its official debut late next year.