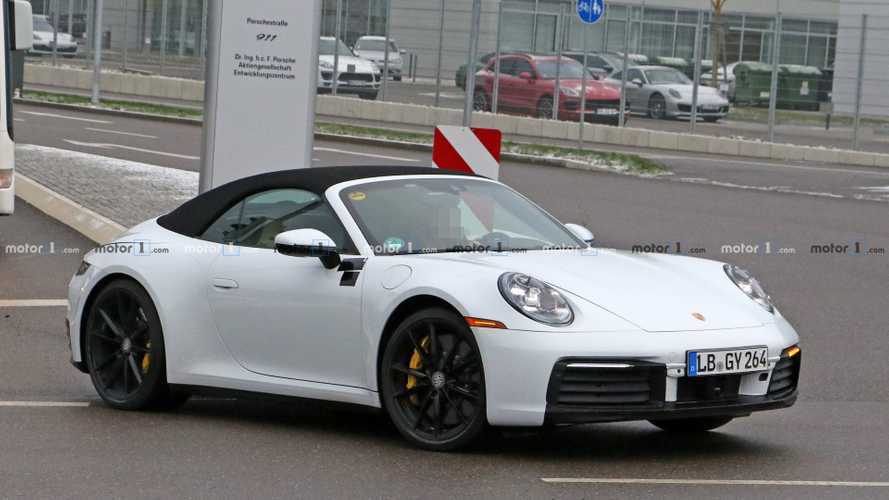 This Carrera 4S prototype had very little camo at the back.

[UPDATE] 13 new images have been added at the beginning of the gallery, below. These are showing a different prototype.

Having introduced the 992-gen 911 coupe last month at the Los Angeles Auto Show, it seems just about right Porsche is currently putting the finish touches on the cabriolet. We’re dealing with a Carrera 4S near-production prototype caught by our spies out and about on the streets of Germany ahead of an official reveal expected to take place in the months to come. It’s not known whether the premiere will occur in January at the Detroit Auto Show or a couple of months later in Geneva, but given the light amount of camo, we probably won’t have to wait much longer.

As a matter of fact, one could say the test vehicle is virtually undisguised as Porsche only covered the corners of the taillights and the center section, but it’s not like we don’t know what is hiding underneath the black tape. It’s the same story with the camo on the rear bumper, which is there to hide the model’s designation: 911 Carrera 4S. The rest of the car is essentially exposed, and it looks exactly like you’d expect.

The all-paw convertible from Stuttgart will be powered by the same twin-turbo six-cylinder boxer engine as its coupe sibling, with the 3.0-liter unit producing 443 hp and 390 pound-feet (530 Newton-meters) of torque. Performances should closely mirror those of the coupe: 0-60 mph (0-96 kph) in 3.2 seconds with the Sport Chrono Package and a top speed of 190 mph (306 kph). Being slightly heavier than its fixed roof counterpart, it will be a tad slower, but you’ll immediately forget about that after lowering the roof.

In terms of pricing, it goes without saying the cabrio will command a premium over the coupe, so expect to pay more than the $113,00 Porsche wants for the Carrera S and $120,600 for the Carrera 4S coupes in the United States.

The future of the 992 looks bright: