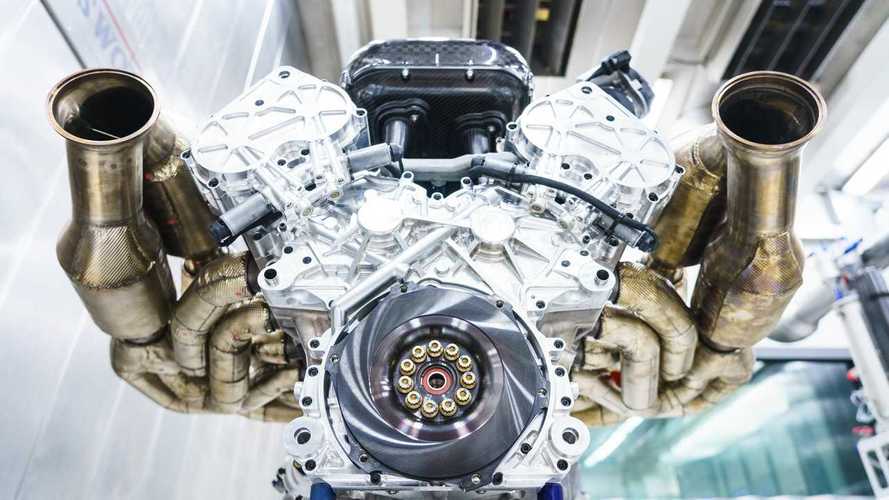 After this distance, Cosworth would check the Valkyrie's engine block for cracks and replace the pistons and valves.

Aston Martin recently unveiled the astounding specs for the engine in the automaker's upcoming Valkyrie hypercar. The Cosworth-developed 6.5-liter, naturally aspirated V12 with hybrid assistance producing an amazing 1,000 horsepower (746 kilowatts) at a sky-high 10,500 revs and 546 pound-feet (740 Newton-meters) of torque at 7,000 rpm. This huge output comes with a disadvantage, though, because the powerplant has a predicted life of just 62,137 miles (100,000 kilometers), according to Car and Driver.

Cosworth Managing Director Bruce Wood said that the company designed the engine to only need routine maintenance until the end of its service life. "Our expectation is that at 100,000 kilometers, [the engine] would be replaced," Wood told Car and Driver. "That's not to say we think there is going to be a hole through the side of it, but our expectation would be that a lot of the components would be worn out. The reality is that if anybody got to that point, we'd take the engine out, strip it, and crack-test it. If the block was fine and not excessively worn, there would be no reason not to rebuild it with new pistons and valves."

Get the latest details on the Valkyrie:

Wood also provided slightly different specs for the engine's ability to rev. While Aston Martin's official announcement says the V12 can reach 11,100 rpm, Wood indicates that there's a soft limit at 11,200 rpm, and fuel shutoff kicks in at 11,400 revs.

To make this crazy specs possible, Aston Martin says that the V12 features pistons that Cosworth mills from billets of aluminum in a similar method as Formula One engines. In addition, the crankshaft is 50-percent lighter than the V12 than the piece in the One-77 supercar.

The engine life could be worse, though, because Mercedes-AMG boss Tobias Moers says the firm's upcoming One hypercar can go just 31,000 miles (50,000 kilometers) between rebuilds. The mill is a turbocharged 1.6-liter V6 with four electric motors with a combined total of over 1,000 hp (746 kW). The combustion part of this setup can rev to 11,000 rpm.