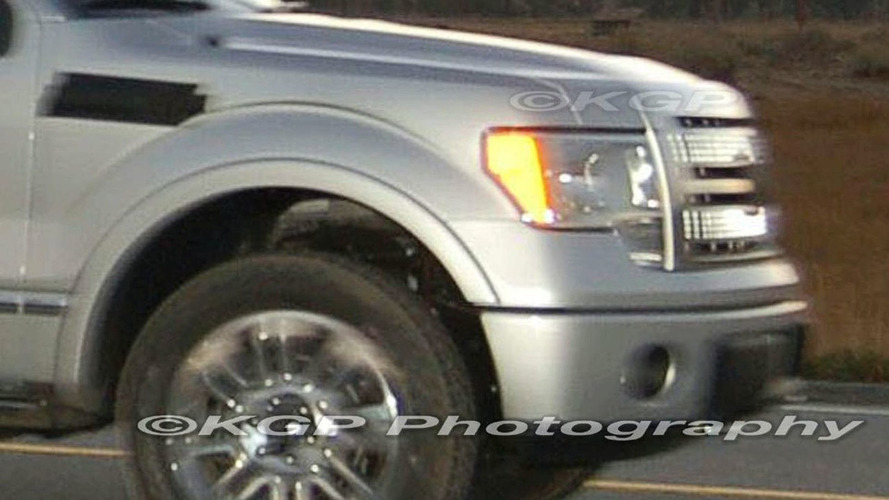 Although significant engineering changes likely lie under the surface, it now seems clear that the visual changes represent little more than a thorough facelift.

One of our spy photographers stumbled upon an essentially undisguised prototype of Ford's redesigned F-150. As the sunlight was just about to slip behind the mountains, the photographer managed one revealing shot as the truck rushed back to the safety of its enclosed trailer, parked up the street at a gas station. Considering that every F-series prototype seen to date has been covered from stem to stern in heavy black camouflage, it appears that we caught this unclad look at Ford's new truck at the tail-end of a photo-shoot. The prototype truck was loaded and covered before our impromptu spies could swoop in for more shots.

This cleanest-ever look at the new F-series reveals Ford's surprisingly cautious approach on its new truck. Although significant engineering changes likely lie under the surface, it now seems clear that the visual changes represent little more than a thorough facelift. The headlights, hood, grille, and front bumper have been changed, and it appears that this truck displays some version of Fords Edge-inspired thick-barred grille treatment is in play here. But it thankfully manages to avoid looking like a three-bar-grilled, Edge clone. New tail-lights are also clearly in the cards. The front and rear fenders also show a very subtle change--a sharp-edged character line sculpted in above the F-series' flared wheel arches adding some minor detailing to the side panels. New side mirrors, and a revised side trim strip round out the visual changes.

In light of the huge influx of new blood that has entered the full-size truck market in the last 12 months, the tepid changes to this F-series are a bit of a surprise. The small changes beg the question: Does this signal a lack of imagination at Ford, or is it simply a sign of the degree of cost-consciousness in Dearborn? Perhaps changing consumer tastes and rising gas prices have hampered the F-150's cash-cow status among the Blue Oval bean-counters, keeping the visual changes to a minimum.

We have included an earlier shot of the new F-150's undisguised dashboard to round out the design changes in store.