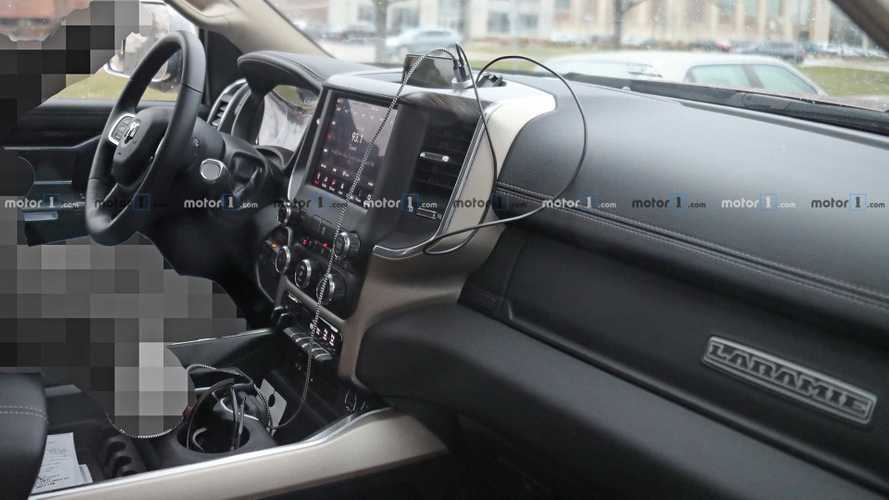 Another fleet was caught on the move, only this time we got up close for a better look inside.

We have more Ram 2500 HD sightings today, and as we’ve previously seen, the big pickups are completely uncovered from front to back. This time around, however, our spy photographers were able to get up close to the heavy-duty pickup for our first real look at the passenger compartment. As with the exterior, nothing is hidden on the inside.

To no real surprise, it pretty much mimics what we’ve seen on the new Ram 1500. The shots feature a Laramie edition, and it certainly looks comfortably upscale with stitching on the dash and warm interior tones. The instrument cluster, center console, and infotainment system seem identical to the 1500, though this truck appears to have the smaller 8.4-inch screen. A large portrait-oriented 12-inch screen should be an option.

We don’t catch any new details on the outside, but the red truck in the gallery below looks to be a Power Wagon in Tradesman trim, and we haven’t seen that particular combination yet. The light brown Ram is a Laramie Longhorn edition with the white truck being a Limited model, and as with previous spy shots, we can see the hierarchy in the lineup with the Limited wearing a special grille and more chrome. Higher-spec models should also receive LED headlights.

The one thing we still don’t know about is power. It’s expected that current engine and transmission options will largely carry over, which means a choice of either the 5.7-liter or 6.4-liter V8, along with the 6.7-liter Cummins turbo diesel. Minor power increases certainly aren’t out of the question, especially for the diesel which currently ranks behind the competition from Ford and Chevrolet. Shifting should remain the duties of either a six-speed automatic or six-speed manual gearbox.

Since Ram has basically revealed the new truck in an unofficial capacity, don’t expect much of a wait for official information. That should happen no later than next month at the 2019 North American International Auto Show in Detroit.