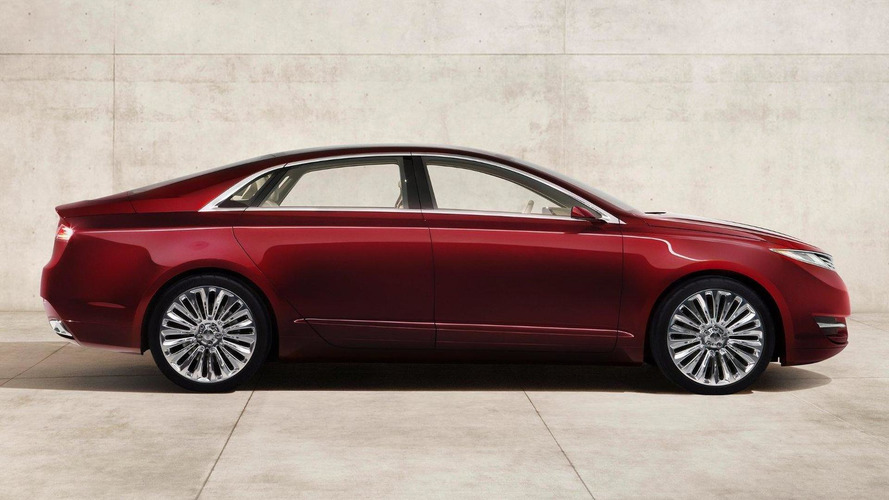 The battered American luxury brand Lincoln has shown signs of a faint heartbeat with the unveiling of of the MKZ Concept at the Detroit Auto Show today.

The battered American luxury brand Lincoln has shown signs of a faint heartbeat with the unveiling of of the MKZ Concept at the Detroit Auto Show today.

The MKZ Concept, which strongly hints at the 2013 production model, is the first real development to emerge since Ford committed to invest $1 billion in Lincoln by 2014 in a bid to revive its troubled luxury brand.

Although the overall body silhouette has potential with a sweeping roofline that skews the typical sedan three-box shape, we wish they would stop using chrome wheels and find a new grille design. We can certainly appreciate the historical importance of the split-wing grille, introduced on the 1938 Lincoln-Zephyr, but it's time to move on and try somethig new. Other exterior features include a panoramic glass roof, LED full-width tail lamp and rear fascia integrated exhaust tips.

The interior on the other hand does a better job as the sweeping center console is quite striking. Overall, the atmosphere conveys craftsmaship and fine materials. Other interior features include 8-inch LCD touch screen, reconfigurable 10.1-inch TFT LCD instrument cluster and the latest version of MyLincoln Touch in-car communications and entertainment system.

The MKZ not only represents a preview of its next-generation vehicles, but also symbolizes the resurrection of the withering brand. As part of Ford's commitment, the company will launch new or updated versions of the MKS, MKX, MKT and Navigator. Additionally, Lincoln will gain a new entry-level sedan and, possibily, a small crossover.

"With the Lincoln MKZ Concept, we are not introducing a new car. We are essentially introducing a new brand," said Derrick Kuzak, Ford Motor Company group vice president for Global Product Development. "The MKZ Concept is the next step in the reinvention of Lincoln, something we've been quietly but aggressively pursuing."

The mid-size sedan arrives in dealerships later this year, but of course without some of the fancy design elements.