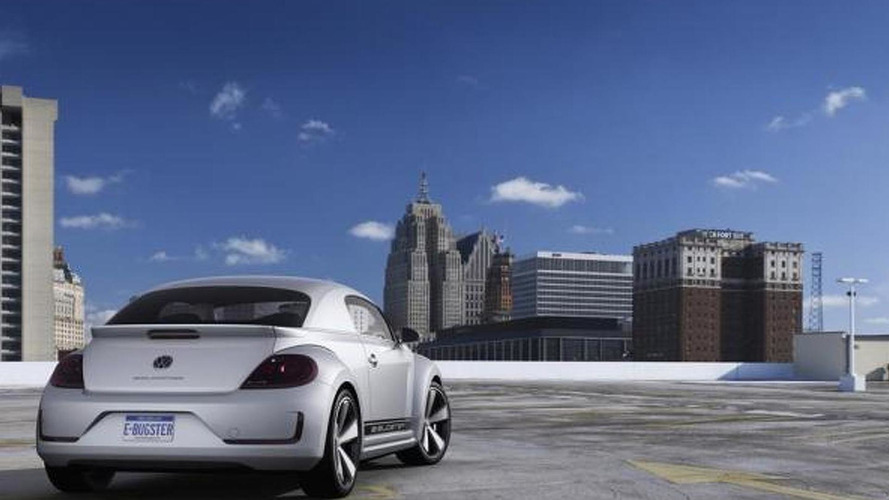 Photos and first details of the Volkswagen E-Bugster concept and Jetta Hybrid have leaked prior to their unveiling tomorrow at the North American International Auto Show in Detroit.

Photos and first details of the Volkswagen E-Bugster concept and 2013 Jetta Hybrid have leaked prior to their unveiling tomorrow at the North American International Auto Show in Detroit.

Based on the 2012 Beetle, the E-Bugster pays tribute to the Volkswagen Ragster concept by losing three inches (7.4 cm) of height from its roof for a sleeker look. This lowering of the roof is most noticeable when looking at the shortened windows in the photos. The Ragster concept which debuted exactly six years ago at NAIAS also had its roof chopped by six inches (15 cm).

But perhaps as a sign of the times, the E-Bugster also features an electric drive unit. The motor generates 114 hp (85 kW / 116 PS) and 199 lb-ft (270 Nm) of torque from a 695 lb (315 kg) lithium-ion battery pack located in the rear. Typical of electrical cars these days, the driving range is less than 100 miles and recharging can be done via 120- and 240-volts. There's also a quick charge level which charges the battery to 80 percent capacity in only 30 minutes.

The Jetta Hybrid is equipped with a 7-speed DSG transmission which can decouple form the engine and allow the vehicle to be powered exclusively by the electric motor for 1.2 miles up to 44 mph. The Jetta Hybrid weighs only 221 lbs (100 kg) more than a non-hybrid Jetta which is approximately 3,310 lbs (1500 kg).