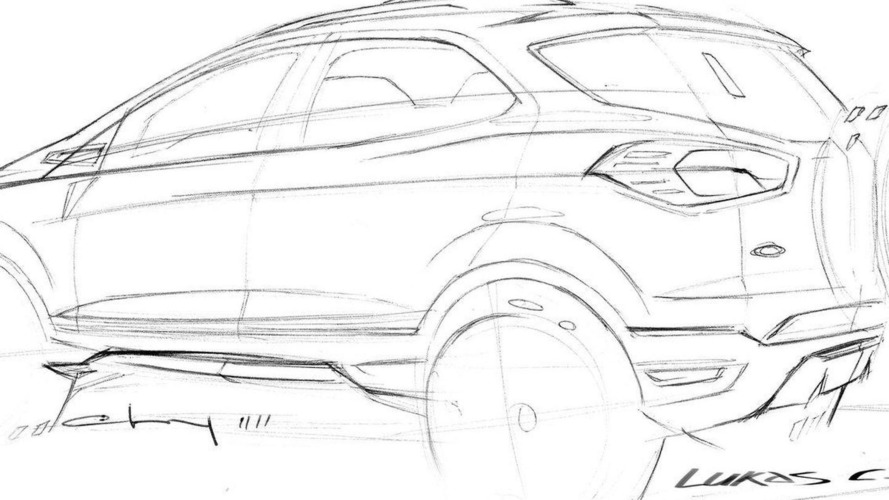 Ford has released the new EcoSport prior to its public unveiling at the New Delhi Auto Expo tomorrow. Initially targeted to emerging markets, the EcoSport will eventually hit global markets.

Ford has released the new EcoSport prior to its public unveiling at the New Delhi Auto Expo tomorrow. Initially targeted to emerging markets, the EcoSport will eventually launch globally.

The Ford EcoSport looks substantial despite its compact dimensions. It features high ground clearance and integrated lower body cladding for that rugged look. The EcoSport is defined as being targeted to consumers who want a sporty and casual car that stands out, but in an intelligent and sustainable way.

The compact SUV features a turbocharged 1.0-liter Ecoboost engine with 120 PS (118 hp / 88 kW) and 170 Nm (125 lb-ft) available from 1,300-4,500 rpm. The direct injection engine is mated to a five-speed manual transmission. Ultimately, 1.0-liter Ecoboost engine will be made available in Ford models in China, Europe, North America and other regions.

The new EcoSport was developed in Ford's Development Center in Camaçari, Brazil. Previously, the EcoSport name was used on a crossover SUV version of the European derived Ford Fusion MPV in Latin America since 2003 and served as the first affordable SUV in the region. It went on to sell 700,000 vehicles in nine years.

This new Fiesta based B-platform SUV, which is the second of ten new models to be spawned from this platform by mid-decade, will eventually be sold in 100 markets worldwide. Ford projects the new B-platform family of vehicles will represent more than 2 million units of annual production as compact cars continue to drive global growth.

The EcoSport will be produced at plants in Brazil, India, and other markets to be announced at a later time.