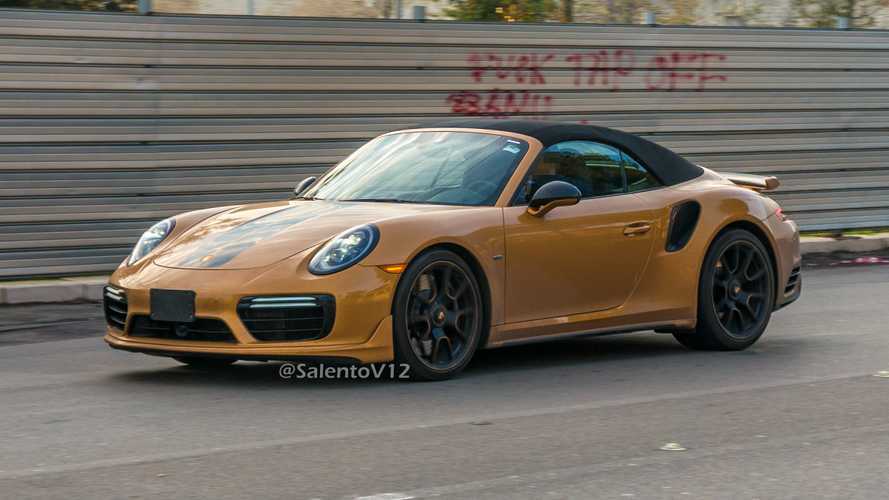 It's an extremely rare car.

Update: We asked for folks to contact us if new Exclusive Series Cabrios were spotted, and we heard from Porsche directly with great news to share. The automaker is building 200 of the special-edition 911s exclusively for the North American market. That's in addition to the 500 coupes already planned.

As something of a swan song for the 991-series 911 Turbo S, Porsche made the limited-edition Exclusive Series. The package added all kinds of carbon fiber, unique badging, and special trim, not the least of which being the cool over-the-top stripes. It also added power to the 911’s already potent twin-turbo flat-six, bumping it to 607 horsepower (453 kilowatts). Only 500 were built, and until now, we thought they were all hardtops. Apparently, we thought wrong.

Salento V12 on Facebook happened upon a 911 Cabrio while in Lecce, Italy, which isn’t necessarily a rarity. As you can see, however, this one is wearing all the bling you’d find on the Exclusive Series, right down to the stripes and wheels. The Facebooker granted us permission to use some high-resolution photos, and a closer look reveals other Exclusive Series items such as the black brake calipers with gold trim, and the special badges on the fenders. There’s also the exterior shade of Golden Yellow Metallic, which itself was only available on the Exclusive Series.

We suppose it’s possible someone could’ve built an Exclusive Series clone, but gathering all the necessary parts would surely be a monumental chore given the exclusivity. Looking back on Porsche’s original announcement of the Exclusive Series (linked below on the left) we see that coupé is specifically referenced, but the company didn’t say it would only build hardtops. Porsche certainly has open arms for customers seeking special customization projects, and the original press release on the Exclusive Series does say its in-house Porsche Exclusive Manufaktur group “specializes in tailoring to customer wishes.” Perhaps this is one of them.

Go for the gold:

Considering only 500 models were slated for production, we’re very interested to know just how many of those are drop tops. Less than 50? Less than 20? If you’ve seen an Exclusive Series Cabrio or have any information, shoot us an email. We love learning about super rare rides from Porsche.