Video captured a horrifying crash on Interstate 95 in Hobe Sound, Florida, on Monday, December 3, when a Chevrolet van rear-ended an Audi and launched the sedan spinning into Florida State Highway Patrol Trooper Mithil Patel. The quick-thinking officer was able to push a bystander out of the way, likely saving the man's life. However, the Audi broadsided Patel and launched him into the air. 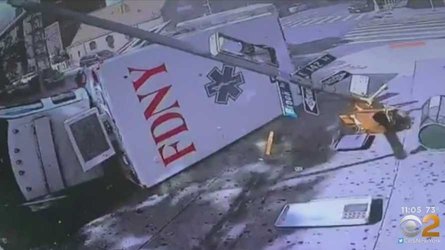 Two Ambulances Smash Into Each Other On Way To Same Scene
⠀ 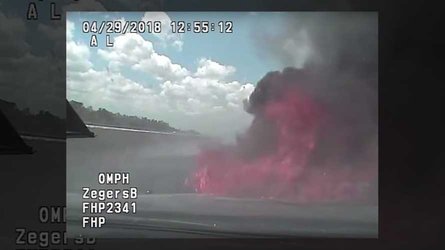 Trooper Patel was on the scene of a previous accident with Rony Bottex's vehicle. The two men were talking along the side of the Interstate when the Audi spun out of control. The video shows Patel pushing aside Bottex, who had his back to what was happening and didn't see the car coming right at him.

Other officers were already at the scene of Bottex's accident, so they were able to respond to the new emergency immediately. Patel incurred serious injuries and had to go to the hospital. By the evening of December 4, he was able to go home, though. Bottex also hurt his knee and required crutches.

On Twitter, Florida State Highway Patrol urged people to slow down, move over, and pay attention when they see a Trooper on the side of the road. In many states in the U.S., laws stipulate that drivers must leave the right lane clear if an officer pulls someone over. If traffic doesn't make that possible, then vehicles in the right lane must slow down considerably for the officer's safety.