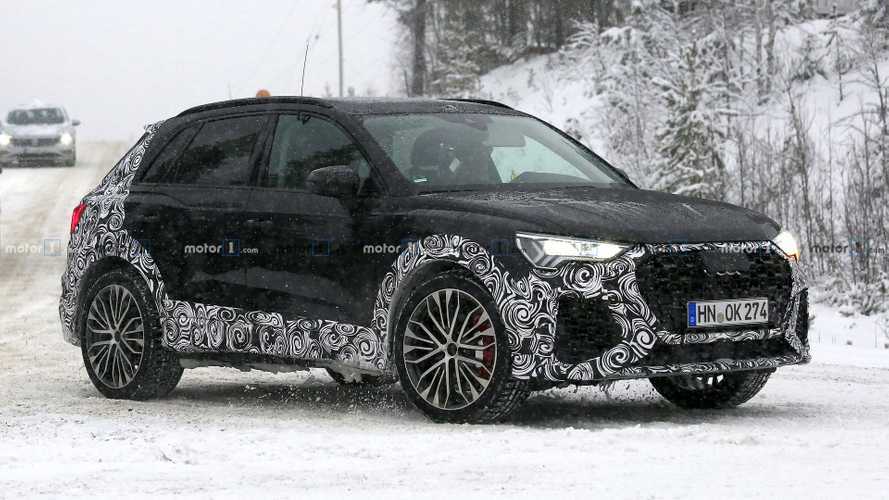 Slippery roads are not a problem when you have Quattro.

To the untrained eye, this may look like a fairly regular 2019 Audi Q3 at a first glance. It’s mostly because the design team working in Ingolstadt is known for its understated styling approach for high-performance versions of regular cars. It will be a similar story with the second-generation RS Q3, which our spies have caught on camera near the Arctic Circle with surprisingly very little camouflage.

It appears to have the production front bumper with those massive air intakes, while the disguise on the wheel arches could be a sign the RS version will have wider tracks than the regular Q3. Those chunky alloy wheels can’t hide the large brakes lurking from behind where we can easily see the typical Audi Sport red brake calipers at the front axle.

Moving at the back, it looks like the RS Q3 is finally getting the pair of oval exhaust tips it deserves. As you may recall, the old version had just one located on the left side of the rear bumper, but you’ll be happy to hear its successor will get a sportier-looking twin setup.

As to what will power the hot crossover, it’s not exactly a top secret since everyone’s expecting the turbocharged inline-five to find its way underneath the RS Q3’s hood. The 2.5-liter mill should push out at least the 400 horsepower available in the RS3 and TT RS, but we won’t be too surprised if Audi’s talented engineers will find a way to extract more power.

Previous spy shots have revealed a warm SQ3 is in the works, and it would make sense for that version to come out first, possibly at some point next year. If that’s correct, the RS Q3 won’t be introduced sooner than 2020. When it will eventually arrive, reports say Audi Sport will sell its amped-up compact crossover in the United States.