We're not sure about those wheels...

It was only yesterday when the E-Class Coupe facelift and next-gen S-Class were spotted testing on the streets of Germany and now another Mercedes has been caught on the road. This time around, it’s a go-faster AMG model based on the latest-generation GLE introduced earlier this year. The angular exhaust tips at the back indicate it’s the range-topping “63” version whereas the electrified “53” model will also have four tips, but round ones as seen on the E53. 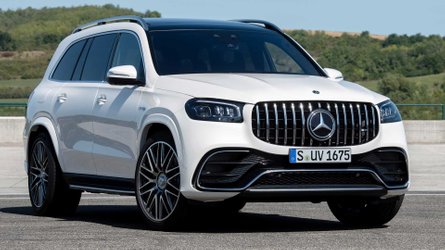 There’s actually not much camo on this prototype, and even on those areas where the swirly disguise has been applied, it’s still easy to figure out the real design. Up front, there’s the Panamericana grille and a pair of large air intakes flanking the lower grille. As it’s the case with the lesser GLE versions, the license plate is located right underneath the three-pointed star, which by the way is nowhere to be found on this prototype. Those black alloy wheels look surprisingly small and don’t have the most appealing design, but rest assured Mercedes will sell the new GLE 63 with an assortment of designs in various sizes.

Since the car was patiently waiting at a red light, the spy photographer was also able to take a peek inside the cabin. Interestingly, Mercedes didn’t even bother to hide the test vehicle’s cabin as we can clearly see the digital screen layout, with a big “AMG” logo underneath the tachometer of the instrument cluster. We’re not expecting any major changes over the non-AMG GLE, but expect some sporty touches here and there to differentiate the flagship version from the more attainable flavors of the midsize luxury SUV.

Needless to say, the highlight of the new Mercedes-AMG GLE 63 will be the twin-turbo 4.0-liter V8 engine. It’s expected to offer more than the 550 horsepower produced by the old twin-turbo 5.5-liter V8 installed in its predecessor in which it was dialed to 577 hp for the GLE 63 S. It remains to be seen how much AMG muscle it will deliver, but it would make sense for the flagship S model to match the 603 hp of the E63 S sedan. There’s room for more considering the GT 4-Door Coupe has the same engine dialed to a massive 630 hp.

Expect the wraps to come off at some point in 2020 following the launch of the first-ever GLE 53 next year with 429 hp on tap like the E53.