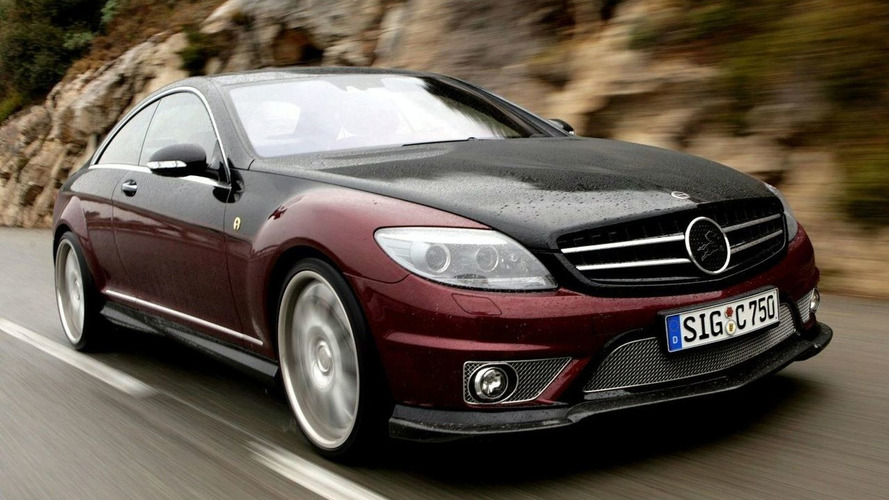 This is a Maybach for those that aren't yet ready for the chauffeur driven life. It's opulent, outrageously flamboyant and as clear an indication of wealth as a solid gold house.

It takes a lot to impress the residents of Monaco, the playground of the rich and the famous and the home to far too much gold clothing. So when one gent virtually chased the staff down the street to get his hands on the Carlsson Aigner CK65 RS “Eau Rouge”, its credentials as a luxury lifestyle car were assured.

The first collaboration between the Mercedes tuning legend and the leather designer specialising in high-end handbags might seem like a simple marketing ploy to cash in on each others’ respective PR departments. But for Rolf Hartge this tuned CL goes way beyond that and, with four of the 10 cars already sold and this one finding a new home, he’s clearly on to something.

Because the Aigner range, which will spread to the S-Class and beyond, is a serious sales initiative aimed at taking Carlsson to a new audience looking beyond the technical junkies that truly want to feel the sporting vibe that the Merzig firm infuses into Mercedes’ understeering limousines. This is a lifestyle car aimed at the seriously wealthy and their wives, the kind of folks that don’t even blink at the €365,000 price tag. In fact, the last question they ask is: “How much?” It’s a different world up there…

This is a Maybach for those that aren’t yet ready for the chauffeur driven life. It’s opulent, outrageously flamboyant and as clear an indication of wealth as a solid gold house. The seats really are made from the same grade of leather that command eye-watering prices in the fashion outlets at airports, treated to cope with the wildly differing demands of a car seat. Alcantara fills in the gaps between this glossy luxury that treads dangerously close to crass yet, in the flesh, just about scores as class.

As does the two-tone paintwork, finished to silken perfection, which in the subtle tone of red works a treat – especially with the carbon-fibre bodykit that gives the toughest looking car in the line-up some added beef.

The black-and-gold, as well as the black-and-white version to follow might not fare so well aesthetically, but then when a customer is splashing that much cash then they’re entitled to ask for what they want. Suffice to say that no two cars will be the same, on the surface anyway.

Under the skin, they’ll get the same finely honed animal with no obvious competition beyond the Maybach tuned by Brabus, and this one is way more fun. Rolf Hartge is passionate about his racing and nothing that goes on to these cars, in the mechanical sense at least, is there without a reason. Even his wheels are the lightest of their type and cut almost 50 per cent of the weight compared to AMG’s own and that is huge.

New filters, improved cooling to lower the charge pressure, a remap and a Carlsson sports exhaust is all it took to liberate 695bhp from the bi-turbo V12. That’s 100 more horses than the Stuttgart original, but torque was the real target as low-end pull matters more than high-end power in a heavyweight beast like this.

All 737lb/ft comes from 2000rpm and it would be more if Carlsson wasn’t concerned about liberally smearing expensive transmission components over the tarmac. As it is, this stretches some of the most advanced traction controlling computers on the planet to their very limits on a damp mountain road with a dizzying view of Monaco. On the slick road even the Dunlop SP Sport Maxx-wrapped 21 inch alloys couldn’t hold on and span wildly underfoot as the car wriggled from side to side.

On dry tarmac it would simply have surged forward, breaching the 62mph mark in a barely believable 3.9s – faster than a Ferrari 612 Scaglietti, and it will do so with four up, in absolute comfort, all the way to the mystical 200mph mark – again limited due to the tyre rating. But if you’re expecting a rocketship feel and noise like the four horsemen of the Apocalypse charging down a hot tin roof, through machine gun fire, it would be a tad disappointing.

A Mercedes, especially a high-end one, is unique animal and while customers want apocalyptic performance there can be no sacrifice – so there isn’t. Pushed into a kickdown mid-corner the CK65 RS snaps before the Mercedes’ instilled safety devices kick in to prevent disaster and a previous jaunt in a lesser powered machine had already revealed a tyre shredder that was near impossible to spin, so this one would be a mind blower if forced out of line.

But you’d be a fool to drive a car like this sideways, even with Carlsson’s C-Tronic system that is so well developed it could easily have come from the brain and GDP negating budget of a major manufacturer.

Most tuners content themselves with simply lowering a car and jacking up the power, sacrificing comfort in the name of cornering prowess. But Hartge is a perfectionist and a true craftsman, not a butcher.

So the CK65 RS sits 30mm lower than the standard car in standard, marble smooth conditions. But the computers constantly monitor the suspension’s movement and when the ride even approaches choppy it will lift the car back to its standard settings. The magic carpet must float at all times, unless conditions allow it to hunker down and bite harder into each and every corner. It will even dump the extra power if the car steps outside its comfort zone, such is the sophistication of the software.

The kind of customer that steps up to the plate to buy the Aigner CK 65 RS might not be the first to feel such intricacies of handling and grace, but Hartge believes they’ll soon learn to appreciate a fast car with no negative payback. And that is enough for repeat business.

It’s no ultimate sportscar, those looking at the RS badge and expecting anything more than the wheels as a weight saving measure will be swiftly put right by the quoted kerbweight of 2240kg. Eventually that weight simply takes over and will pull the car off the black stuff, but with the modifications this might well be the ultimate GT as its simply a case of planting the throttle and twisting the wheel. Watch the entry speed, stay smooth on the throttle and this machine will devour a nation.

You can argue against these super coupes on environmental grounds and even taste and decency, but there’s no denying the monstrous skills at work under the lavishly appointed skin. Carlsson has taken perhaps the finest large tourer on the market and created a Maybach for those that like the front seat – even when it is vivid red.