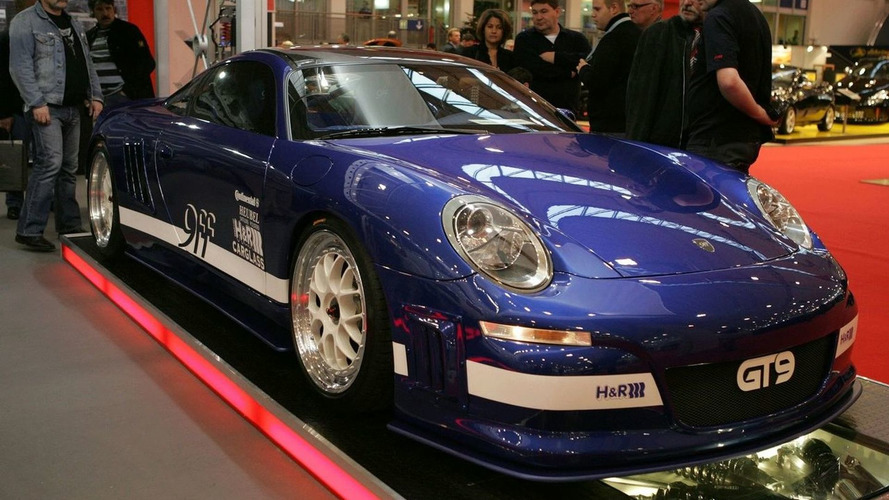 It was a refreshing change to take a step back in time to the denim jackets, mullet hairdos and outrageous horsepower on offer at the Essen Motor Show.

With every car show coming with an environmental message so strong it could have been penned by Al Gore himself these days, it was a refreshing change to take a step back in time to the denim jackets, mullet hairdos and outrageous horsepower on offer at the Essen Motor Show.

Despite substantial manufacturer support this is becoming more and more of a tuner show, which is really no bad thing as it gives the creators of some of the wildest cars on God’s green Earth the chance to shine without getting the green movement throw paint on the cars.

And perhaps the most exciting of all was the Abt R8-R, a stunning rendition of pretty much everyone’s car of the year. While the discreet looks of Audi’s original has won plaudits around the world, that was never going to be enough to satiate the tuning crowd and Abt went to work on a monster that is, perhaps, one of the most jaw droppingly gorgeous cars of recent years.

Everything is beautifully done, from the red carbon-fibre rear plate above the eaully expensive diffuser, to the new tailpipes and rear wing right through to the enlarged side air intake and toughened front. The R8 left me cold and seemed a design mistake, this one is simply stunning from every angle and it’s the kind of car that will have you scouring the internet for dodgy kidney dealers if you’re even close to a car nut.

The rumoured supercharger hasn’t materialised, but the carbon parts help strip weight from the R8 so it should be quicker anyway. Before this the Lamborghini Gallardo that was the car I went to sleep at night dreaming about. Not any more, with Abt’s help the little brother has hit back.

Abt bought the rather tasty AS4, too, its conversion of the A4, but that was never going to get a look-in next to the stunning R8, even though it will probably sell in far greater numbers.

In its complete form for the first time, was the 9ff GT9, which should soon become the fastest car in the world. Jan Fatthauer has worked tirelessly on his own supercar and in the flesh it looks absolutely stunning. Effectively a flattened 911 with no wing this machine is all about top end speed and comes with a 950bhp 4.2-litre, twin turbocharged powerplant.

Now cooling is the major issue with a car like this and numerous vents have erupted through the silken carbon-fibre body to make this dream a reality. Expect a 0-60mph time of less than three seconds, significantly less, and this car to be the fastest in the world, bar none, within a few weeks. Fatthauer was aiming at the Bugatti Veyron, now it’s the SSC Ultimate Aero, and all he needs to make it work is a dry day – not the easiest thing to achieve in Germany right now.

Fellow Porsche tuning giant Cargraphic was also out in force with its GT2, replete with 680bhp through a rea-drive chassis that already inspires fear and awe in the car-loving community. Fitted with a 3.8-litre twin turbo it will hit 60mph in just over three seconds, should manage more than 225mph and they might even take it to next year’s Tuner Grand Prix, in place of the all-conquering GT3 RSC.

Mercedes tuner Carlsson, with the second in the line of 700bhp CL65s fitted out by German leather designer Etienne Aigner. Now the Carlsson CK65 RS “Eau Rouge” Gold comes with a name longer than the car itself, but it’s beautifully finished on the inside even though the outside is a disturbing shade of stomach upset beige.

We’ve already driven the 200mph Aigner in its original red form, and you can read all about its perfect fit and finish, including the use of genuine handbag grade leather, and the upgraded engine that sends this rocket to 60mph in the time it takes to say it. The opulence of this Maybach for those that still want to drive was a hard act to follow, though, as wheelsandmore found out with their disastrous CLS ‘White Label’.

Their interpretation of the ultimate luxury car included swirling alloys decked out with Swarowski crystals, which ruined the whole impact of a car that could have been quite stunning. A contrasting black, straight cut grille, supplied by Pogea Racing, and the kind of interior that looks built from baby seals rather than withered old cows were a grand start, but then it all went oh so wrong.

For €229,000 you expect something a little classier than this, but then the Middle Eastern and Russian palates are known to be a little less delicate and they could snap this up without a second thought. You’d need to be seriously connected to leave a car with those kind of wheels unattended too, as in most parts of the World the machine would be waiting on bricks when you returned. And those thieves might just have done you a favour…

At the opposite end of the scale, but lots more fun in this writer’s humble opinion, was the TRC Marangoni FIAT Super 5-0-0. Fitted with a Carzone Specials kit, overboost, 320mm brake discs from Tarox, KW coilover suspension and a stainless steel exhaust this machine is overdone like chicken that has cooked for six hours on a naked flame. But it shows what can be done with this cool city car, and even though its not that fast it looks a riot to drive. Watch out for the test…

There are lots more to come, but those were the first cars that struck us at Essen, and the only way most of them could claim to be green would be if they were painted that way.