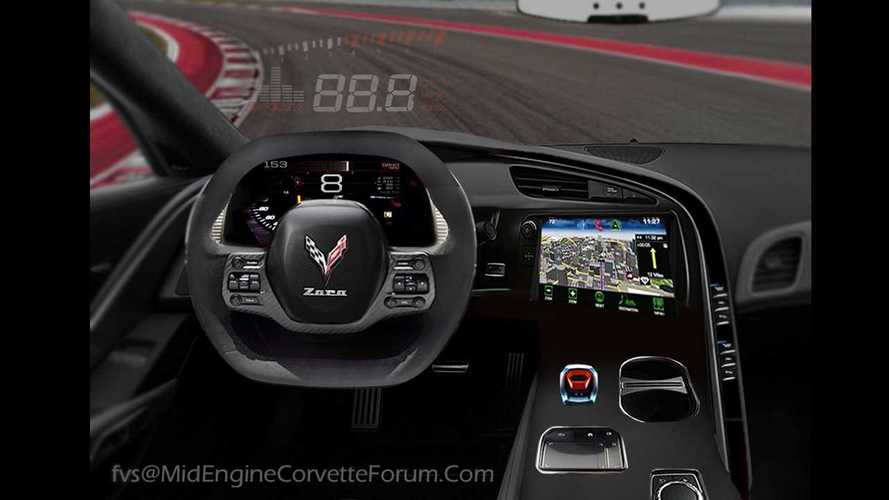 Could this be our first driver's perspective of the new Chevrolet supercar?

We’ve seen plenty of pictures showing the forthcoming mid-engined Corvette from the outside. Spy shots of the interior, however, are much harder to come by. We haven’t been able to get a close look at the camouflaged supercar to see what’s inside the greenhouse, but our friends over at MidEngineCorvetteForum.com are on the job with some solid-looking fan renders.

The artwork comes courtesy of a founding member of the forum with the username fvs. It’s worth mentioning that this isn’t simply a work of creative genius. The rendering was designed through feedback and information from “eyewitness comments” and input from Zerv02 at CorvetteForum.com, who created the initial sketch pictured in the gallery below. There’s obviously a strong similarity to the current Corvette, but the instrument cluster gets a digital makeover. The renders also lack a manual transmission stalk, instead depicting paddle shifters behind the gearbox.

That’s not to say a manual transmission definitively won’t be offered on the soon-to-arrive supercar. In fact, back in September we happened upon a patent from GM that suggests a three-pedal setup could be in the works. A dual-clutch automatic is almost certainly another gearbox in the running, especially with some of the lightning-quick shifts we’ve heard in mid-engined Corvette spy videos. Transmission options could also vary depending on the engine it’s connected too – current thought is that Chevrolet will offer three different engine arrangements, with a range-topper possibly producing upwards of 800 horsepower.

In any case, we shouldn’t have to wait much longer for details. Now that the Los Angeles Auto Show has come and gone without a peep from GM, it’s widely believed that Chevrolet will unveil the new Corvette in January at the North American International Auto Show in Detroit. In the meantime, hit the full thread over at MidEngineCorvetteForum.com for some additional images and behind-the-scenes info that went into this cool interior rendering.