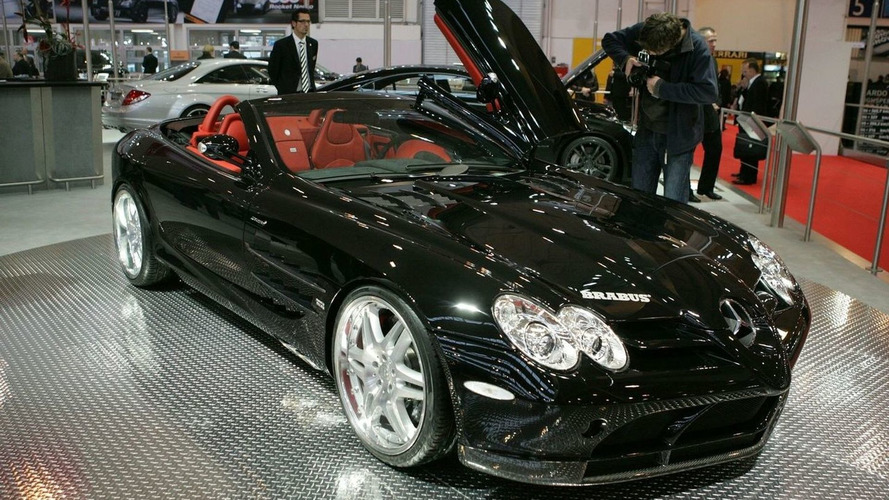 With so much to see and talk about at Essen it takes a moment's quiet reflection to select the final stars from Essen.

With so much to see and talk about at Essen it takes a moment’s quiet reflection to select the final stars from Essen. So it will gall some of them that Brabus had to do so little to an SLR Roadster to grab the top billing. But, well, come on it’s a mighty cool car.

They managed to squeeze an extra 24bhp out of the engine to produce a 640bhp beast and it will now nudge the 210mph mark, with the roof down. Of course the owners would have to be insane to do it, but the fact that they can will be enough for the rich owner who takes possession of this work of art. Brabus has added some carbon-fibre parts that add to the overall impact, as well as a whole new interior with sumptuous stitching and full branding.

We’d love to find out if all this makes a real difference to the driving experience. But they won’t let us, this one is staying as a zero miles machine and will be worth every penny of its €1 million plus asking price. Sulk…

Much cheaper, but no less impressive in its own special way, is the 470bhp Audi S3 from Wimmer Designed to publicise their more general chip tuning business, the S3 is a beast with more or less everything upgraded, beefed up and boosted under the bonnet. The exact performance figures are anyone’s guess, but you can expect serious change from 5 seconds and if the transmission can handle the trauma there’s no reason why this car won’t breach the 200mph mark. Scary, ain’t it?

Oettinger turned up with its S3 conversion, too, in a shade of matte grey that was far sexier than it sounds. Colour-coded wheels added to the icy effect of this monster that kicks out 350bhp and broke three turbos during the development cycle. This one tops out at a more reasonable 168mph and takes more than 5 seconds to get to 60mph. But not much more.

The German firm is also refining its Direct Port Injection technology, which allows multiple maps to slot on to the same chip. It’s clever stuff and lets customers switch easily between the tuned version and standard power, if they’re taking the car to the dealership for instance.

These cars were cool, but not nearly as cool as the cars that I found tucked away in the back, almost as an afterthought, from JB Car Design. As well as their rather fantastic 996 ‘GTR’, with gullwing doors, orange paint and an interior to die for with all the gadgets inside, they turned out with a matte orange Lamborghini Diablo SVR covered with intricate design touches. Now I’m not sure I’d do it to my car, but as a showpiece it’s stunning.

This left the widebody Ferrari Testarossa by its side in the darkest shade and seeing as a decent Lamborghini Diablo costs less than half the price of a new Gallardo, even with the mods this car would be a performance bargain. With the new baby Lambo proving only marginally less common than a girl that goes on the first date, too, it would be a real jaw dropper even with the tough crowds in Monaco or Marbella. If you just need to be noticed, this modern classic might be worth a look.

As for the Rinspeed Le Mans that was on the Continental stand, it wasn’t new, but the dealer was. The tuning industry is a small, small world and seeing ex-Hartge Chief Engineer Volker Schu and Hartge and Gemballa marketing man Phillip Maurer behind the counter was a happy moment. Their company, Speedtec, has taken over as German importer and so you can expect some of the Swiss firm’s madness to hit these pages in the near future.

There were others, including VW’s nod to the environmental with its clean diesel models, but it somehow seems right to go out the way we came in – with the Audi R8.

Had Abt not turned up with its monster, this could well have led the show, thanks to a near lairy design that takes the blobby supercar and hones it to, well, a razor’s edge. It was an impossible analogy to avoid…

PPi’s kit has given the Audi more purpose and under the skin they’ve pumped up the power to 460bhp and torque to 343lb/ft. So now it flies to 60mph in 4.4s and tops out at 190mph, allegedly without sacrificing the poise and comfort of the base car. Intriguingly this is labelled as the Stage 1 conversion, and where there is 1 there has to be more. Watch this space, we think there’s more to come.