Using the running gear and chassis from an F12tdf as a starting point, Ferrari has created this gorgeous, open-roof machine.

While most of the automotive world is focused on the debuts at the Los Angeles Auto Show, our eyes now turn to Maranello, Italy, where Ferrari unveils the unique SP3JC. Using the chassis and drivetrain from an F12tdf, a client commissioned the Prancing Horse's styling center to create this take on a grand-touring roadster. The craftsman there labored more than two years to bring the customer's desired shape into the real world.

The SP3JC retains the F12tdf's long-hood-short-rear-deck proportions, but the design team makes tweaks to many of the panels. The front fascia now appears to be smiling at motorists, and there are more prominent intakes in the corners. Two transparent panels now make the engine visible, too, and the driver might even be able to see it rumbling through the windshield. 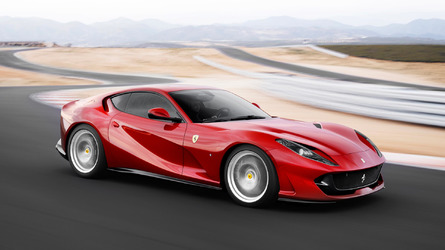 Ferrari 812 Convertible With Folding Hardtop In The Works?
⠀ 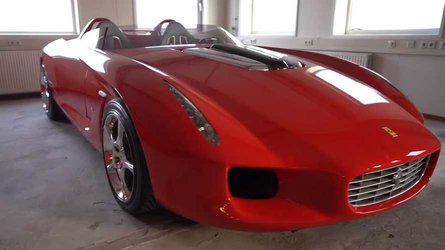 A Rare Look At The Truly Unique Ferrari Rossa By Pininfarina

Where the F12tdf's fender vent exits through the top of the panel, the resculpted sides now have air exiting lower down. This change also flows into the doors that have less prominent creases that on the coupe. A pair of carbon fiber roll hoops now sit behind the seats and a narrow wing connects them.

The SP3JC's rear has little in common with the F12tdf. Pairs of circular taillights replace the coupe's single lamps on each side. The louvered rear bumper looks like a product from Gilette. The exhaust surrounds are also more curvaceous than the pieces on the F12tdf.

Ferrari explains the SP3JC odd color scheme as stemming from the client's "passion for Pop Art." The machine features an Azzurro Met (blue) nose and Bianco Italia (a shade of white with strong hints of silver) over the rest of the body. Giallo Modena (yellow) adorns the hood's horizontal stripe, the number 3, and portions of the nacelles.

Ferrari doesn't offer any photos of the cabin but says that the seats are blue leather with white inserts. The lower section of the dashboard also features blue leather, and the color appears on the stitching throughout the interior, too.

The powertrain consists of the F12tdf's 6.3-liter V12 with 769 horsepower (574 kilowatts) and 520 pound-feet (705 Newton-meters) and seven-speed dual-clutch gearbox. The coupe was able to run to 62 miles per hour (100 kilometers per hour) in 2.9 seconds and to a top speed of 211 mph (340 km/h). Open-roof machines generally sacrifice some performance to their coupe counterparts, so the SP3JC might be a little slower but probably not much.

Maranello, 28 November 2018 – The latest Ferrari one-off project, the SP3JC, has been officially consigned to its owner. Designed by the Ferrari Styling Centre, the SP3JC was commissioned by a Ferrari client and collector whose brief set out to create a pure, uncompromising roadster using the chassis and running gear of the F12tdf.

The sole one-off car to be commissioned on this limited-series special, the SP3JC is the maximum expression of open-air motoring, harking back to Ferrari’s epic V12-engined spiders of the 1950s and ‘60s. The striking one-off makes an important and individual styling statement and represents the outcome of over two years of intense work, with close involvement from the client throughout the process.

The SP3JC features a very muscular stance with dynamic sculpturing on the flanks designed to emphasise the front-engine layout, a distinctive air intake outline at the front, and a dramatic rear fascia with horizontal slashes contributing to a wider stance.

The client’s passion for Pop Art is reflected in the strong graphics, and the unique combination of the Azzurro Met and Giallo Modena livery over the main Bianco Italia colour scheme underlines the car’s sensual volumes.

The sporting theme is reinforced by specific detailing such as split glass inserts on the bonnet to show off the 780cv V12 engine, a flying bridge between the fairings of the integral carbon-fibre roll hoops and a brushed aluminium external fuel filler cap.

The seats are trimmed in blue leather with a white insert. The blue leather extends to the lower dashboard and the colour is picked up in the contrasting stitching to the rest of the interior trim.