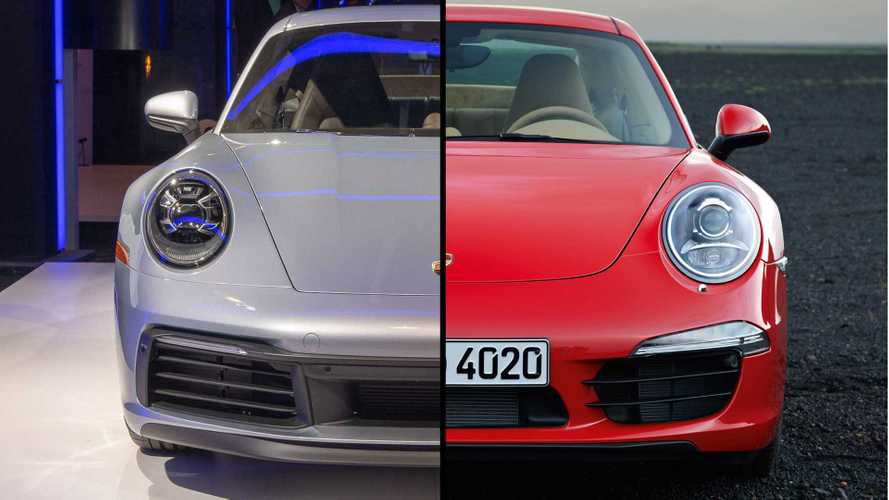 Meet the new boss. Almost the same as the old boss.

The new Porsche 911 officially debuted last night at the Los Angeles Auto Show in a beautiful presentation that not only showcased Stuttgart’s latest supercar, but paid homage to its lineage with a delightful parade of classic 911s. At first glance (and a second, and third) the 992-series seems hardly any different from the previous model. There are differences, however, and once you spend some time scrutinizing the 991 and 992 generations side-by-side, you realize just how different – albeit subtly – the new 911 really is.

Get To Know The 2020 Porsche 911 Through Official Videos

Let’s see what all the fuss is about with some direct comparisons between the new car (on the left) and the old (on the right).

During the unveiling ceremony, it was mentioned that a bit of 1970's 911 influence went into the 992's design. Yes, the changes are discreet but we love seeing the sculptured hood back in place. You'll also notice the edges of the hood are sharper with more angles instead of curves, a styling theme that Porsche said was applied throughout the new car. That's clearly seen in the 992's fascia, which adopts rectangular air vents versus the oval-shaped look on the predecessor.

If you didn't know ahead of time, it would be easy to think this comparison shows different colored 911s of the same generation. The overall shape of the car is virtually identical, from the wheel arches to the rake of the windshield and sloping rear pillar. The squared theme isn't as prevalent here, especially with the rounded seam for the doors. However, the 992's revised door handle is noticeably sharper.

The most noticeable exterior differences between old and new 911 are found at the back, and particularly in a slight profile view. Again, the edgy theme is seen in the resculptured lower fascia, and especially with the new thin taillights connected bit a single strip spanning the engine cover. Speaking of which, the vents are now vertically oriented, and it all combines to bring a satisfying symmetry to the 911's backside. And though you may not realize it at first, those rear fenders have a bit more flare as well.

A straight-on view from the rear highlights the differences a bit better, as well as showcasing just how wide and aesthetically pleasing the new 911's backside is compared to the 991.

Inside the 911 changes aren't so subtle. The car's new digital layout takes center stage, mounted in a broad dash defined by straight lines. There are fewer buttons, and the overall look is rather tidy.

The driver's perspective gives us a better idea of the new 911's cockpit. The broad, square lines on the dash are very noticeable here, but one thing is still very familiar to 911 fans: the rev counter holding the prominent position behind the wheel, centered and highly visible.