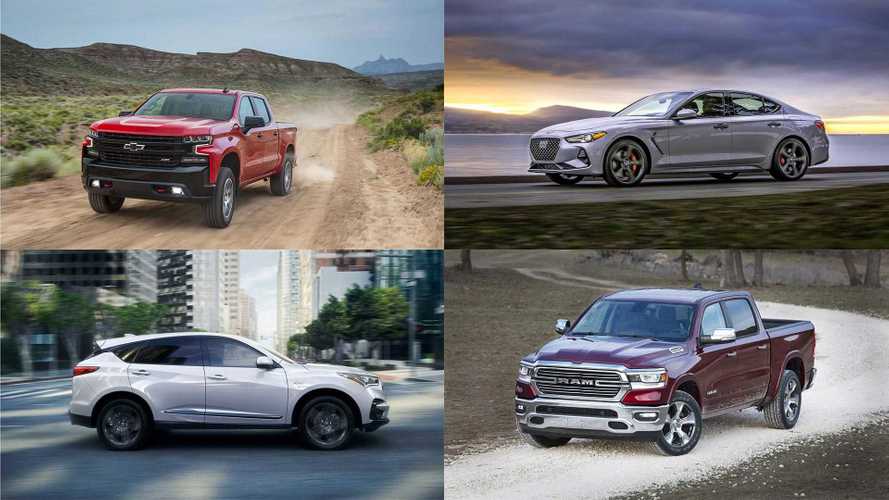 There are three finalists in each category.

Following on the announcement of the 29 semi-finalists in September, the judges for the 2019 North American Car, Utility and Truck of the Year award have narrowed the field once again to the three finalists in each class. We'll find out the winners among them at the North American International Auto Show in January 2019.

For Car of the Year, the finalists are the Genesis G70, Honda Insight, and Volvo S60/V60.

In the utility category, the Acura RDX, Hyundai Kona/Kona EV, and Jaguar I-Pace are up for the trophy.

The Truck of the Year honor could go to the Chevrolet Silverado 1500, GMC Sierra 1500, or Ram 1500. This trio is up for the award by default because there are no other pickups eligible for the trophy this year

“The utility class is the most hotly contested of our categories,” NACTOY Secretary-Treasurer Kirk Bell sad in the finalists' announcement. “Contenders range from game-changing electrics to mainstream brands that have upped their game to luxury brands that are pushing the envelope."

The Jaguar I-Pace would appear to be the favorite in the category because it is already earning awards in Europe. The EV already scored the 2018 Professional Driver Car Of The Year in the United Kingdom and 2019 German Car of the Year. The organizers of the 2019 European Car of the Year have named the Jag as a finalist, too.

Fifty-four judges vote on the winners in each category, and they consider segment leadership, innovation, design, safety, handling, driver satisfaction, and value for the dollar in determining the winner. Rather than being from a single source, the jury comes from a variety of publications, websites, and other media from the United States and Canada.

Last year, the Honda Accord won the 2018 North American Car of the Year. The Volvo XC60 scored a victory in the utility category. Despite being an SUV, the judges named the Lincoln Navigator as Truck of the Year.