BMW X5 M Gets An Overdose Of Upgrades In Abu Dhabi 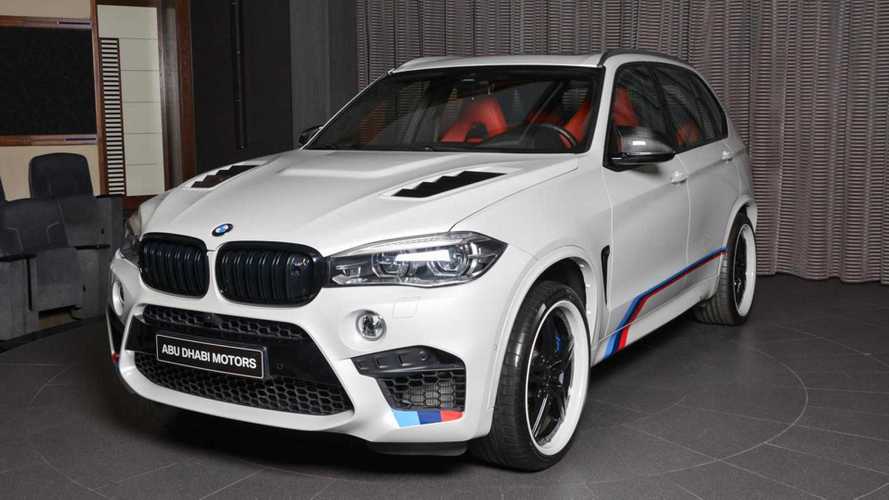 The interior is just as eye-catching thanks to lots of red leather.

A new BMW X5 M is on the imminent horizon, but BMW Abu Dhabi Motors is maintaining interest in the current model by dressing one up in aftermarket accessories from big names in the Bimmer tuning scene. Loading up the SUV with these parts gives it quite a mean look, but the appearance might be a little too over the top for many drivers.

Up front, the X5 wears a vented hood from Manhart that features black louvers and a small power bulge. The black grille matches the hood ducts, which provides some visual cohesion to the vehicle's face. The trademark BMW colors of light blue, dark blue, and red adorn the lower portion of the corner intakes, in addition to stripes running down the side of the body and rear bumper.

The tuned X5 M rides on a set of AC Schnitzer wheels. They feature five pairs of black spokes. The white-painted rims match the body color but definitely aren't to everyone's tastes.

The rear features an Akrapovic exhaust with carbon fiber garnishes. The firm also supplies the diffuser back there.

The cabin is similarly eye-catching with vibrant, bright red leather covering the seats. As a contrast, the trim is mostly black but with crimson stitching that matches the upholstery on the chairs.

BMW Abu Dhabi Motors makes no mention of any powertrain tweaks, so things are likely stock under the hood. The current X5 M packs a twin-turbo 4.4-liter V8 that makes 567 horsepower (423 kilowatts) and 553 pound-feet (750 Newton-meters) of torque. It runs through an eight-speed automatic and all-wheel-drive system. According to BMW, the powerful SUV can hit 60 miles per hour (96 kilometers per hour) in 4 seconds.