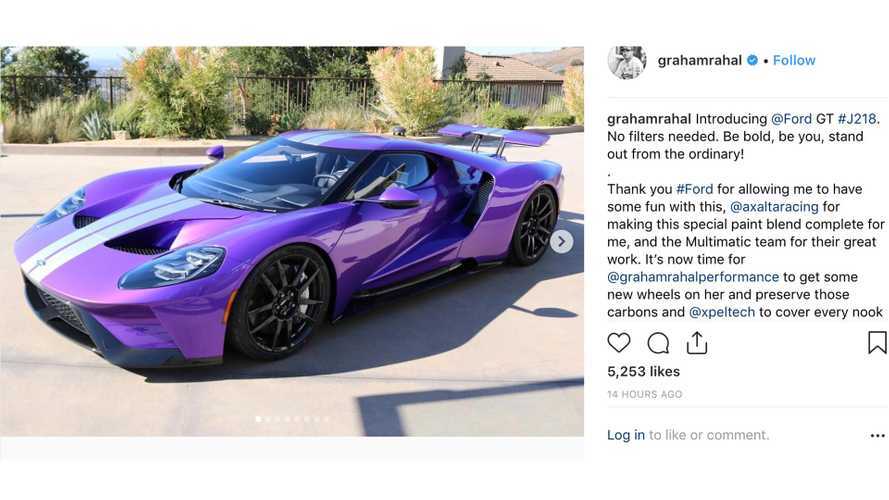 The next step is to add a different set of wheels.

American racing driver Graham Rahal is apparently a fan of going fast off the track, too, and he now has an eye-catching, custom Ford GT to do it. His Instagram post showing off the machine says that he wants to "be bold" and "stand out from the ordinary." This vibrant color should make an easy job of getting Rahal attention on the road.

This lavender color isn't in the GT's normal palette, instead Axalta mixes the custom shade for Rahal's car. The purple hue has a slightly pearlescent finish that makes the color look lighter in the sun and darker in the shade. The shifting tone makes the vehicle even more eye-catching. The silver stripes make the appearance even more striking by providing a visual contrast.

Get the latest scoop on the Ford GT:

Rahal isn't done tweaking the look of his GT, yet. In the Instagram post, he says that he's looking for a new set of wheels to "preserve those carbons." He'll also work with Xpel to cover the car in paint protection to keep the purple pigment pristine.

As a refresher, the GT packs a 3.5-liter twin-turbo V6 that makes 647 horsepower (482 kilowatts) and 550 pound-feet (746 Newton-meters). According to Hennessey's dyno, the supercar makes 581 hp (433 kW) and 513 lb-ft (695 Nm) at the rear wheels. Ford also recently introduced the Carbon Series edition that shed 40 pounds through tweaks like a titanium exhaust and polycarbonate engine cover.

Rahal apparently has a thing for purple cars because his fleet also includes a Porsche 911 GT2 RS in the custom shade Amythest Metallic. It's a much darker tint than what's on his Ford GT but still looks great.