Both muscle cars handle the strip.

Even if you don't have the cash to buy one of the top rung of modern muscle cars like Dodge Challenger SRT Demon or Redeye, there is still plenty of fun to have in the powerful machines that sit a little lower in the brands' lineups. For example, watch this drag race between a modified Ford Mustang Shelby GT350 and a purportedly stock Dodge Charger SRT 392. 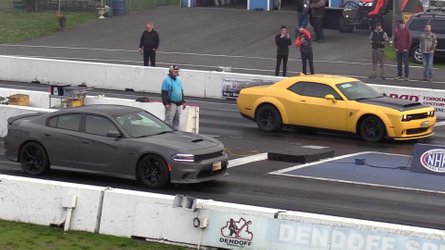 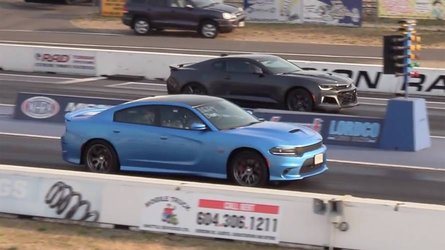 The claimed owner of this Mustang GT350 commented on the YouTube video. He reports that the car has an aftermarket intake, exhaust headers, and cat-back exhaust. It rides on a set of Nitto NT05 performance tires. This mix of relatively simple upgrades would unlock some extra horsepower from the 526-hp (392-kilowatt) pony car. The sticky rubber should help get the output to the ground, too.

Even in stock form, the Charger SRT 392 is a potent sedan. It packs a naturally-aspirated 6.4-liter V8 with 485 hp (362 kW) that runs through an eight-speed automatic.

In this race, the Charger gets the better launch off the line and takes a slight lead. However, the Dodge has a distinct power disadvantage against its Ford competitor, and the pony car eventually pulls ahead. Check out the video to see whether the Charger SRT can make up the difference against the Mustang GT350.

The current muscle car war doesn't look to be ending anytime soon. Dodge is keeping up the fight with the Challenger SRT Hellcat Redeye. Ford is preparing to launch an even more extreme version of the Mustang that reportedly revives the GT500 moniker. Under the hood, there's reportedly a 5.2-liter supercharged V8 making over 700 hp (522 kW), and it might borrow the Ford GT's dual-clutch gearbox.