Featured here is the 840d packing a diesel engine, but there's also a V8 gasoline unit for the M850i.

It was approximately four months ago when BMW pressed play on the 8 Series Coupe production button and now it’s doing the same for the equivalent Convertible. Replacing the defunct 6 Series Convertible, the large luxury droptop is being put together on the same assembly line as the 5 Series and 7 Series variants at the factory in Dingolfing. It’s the place where 1,600 cars are produced each day from the 3, 4, 5, 6, 7 and 8 Series lineups.

The 8 Series models featured here in coupe and convertible shapes are the 840d variants equipped with an inline-six turbodiesel engine. As you probably know by now, the 3.0-liter unit delivers 320 horsepower and 502 pound-feet (680 Newton-meters) of torque channeled exclusively to the xDrive all-wheel-drive system through an eight-speed Steptronic gearbox.

If diesels are not your cup of tea and you want something with more muscle feeding on gasoline, you’ll have to step up to the M850i xDrive and its “completely redeveloped” twin-turbo 4.4-liter V8. The hotter 8 Series Convertible offers 530 hp and a meaty 553 lb-ft (750 Nm), also sent to both axles via the eight-speed auto. These two powertrain versions of the resurrected 8er will be joined at some point next year by a higher specification of the V8 reserved to the M8 bound to be offered not only for the Coupe and Convertible, but also for the yet-to-be-revealed Gran Coupe.

All you need to know and see about the first soft-top 8 Series: 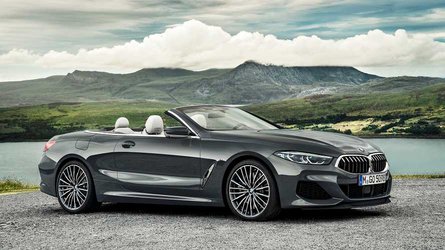 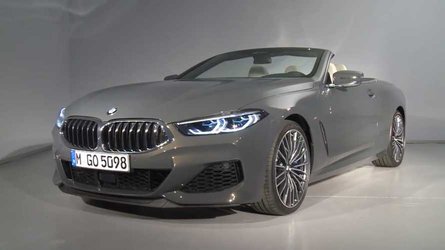 It’s worth mentioning the Dingolfing facility is one of BMW’s 30 global production sites and it’s the place where more than 376,000 cars rolled off the assembly lines last year. To prepare the factory for the trio of 8 Series body styles, BMW had to invest a “total amount in the low three-digit-million-euro range.”

The large plant currently employs roughly 18,000 people, plus 800 apprentices eager to learn how it’s done. Aside from assembling cars, the BMW Group Plant Dingolfing also manufactures components as well as the car bodies for all Rolls-Royce models.

Start of production in Dingolfing: First BMW 8 Series Convertible rolls off the line

Dingolfing. Four months after production of the new BMW 8 Series Coupé ramped up in Dingolfing, the BMW 8 Series family is joined by another new addition from Lower Bavaria. Earlier this week, BMW Group Plant Dingolfing began series production of the new BMW 8 Series Convertible, which will be built alongside BMW 5 Series and 7 Series variants on a single assembly line. The BMW Group has invested a total amount in the low three-digit-million-euro range in the new model family at the site in Lower Bavaria, strengthening Dingolfing’s role as the lead plant for the upper luxury-class segment.

The driver and passengers on board the new BMW 8 Series Convertible are protected from the elements by a classical soft-top. The multi-layered roof stands out with its weight-minimising design and superb acoustic insulation.

The new BMW 8 Series Convertible comes with a black soft-top as standard, with an Anthracite Silver effect variant available as an option. The soft-top opens and closes fully automatically. 15 seconds is all it takes.

Two engine choices will be available when the new BMW 8 Series Convertible goes on sale in March 2019: A V8 engine in the BMW M850i xDrive Convertible (combined fuel consumption: 9.9 – 10.0 l/100 km; combined CO2 emissions: 229 – 225 g/km)* delivers impressive power that can be experienced in particularly exhilarating fashion with the top down. The latest generation of the 4.4-litre eight-cylinder engine has been completely redeveloped to deliver a performance topping out at 530 hp and a torque of 750 Nm.

The BMW 840d xDrive Convertible relies on a diesel engine (combined fuel consumption: 6.3 – 5.9 l/100 km; combined CO2 emissions: 165 – 155 g/km)* unlike anything else in the competitive environment to deliver superior traction and low fuel consumption. The 3.0-litre in-line six-cylinder diesel power unit generates a maximum output of 320 hp and a maximum torque of 680 Nm.