Timelapse Of Crashed BMW 3 Series Getting Fixed Is Worth Watching

We heard you like watching heavily damaged cars being restored and today we bring you a timelapse video documenting the full restoration process of a BMW 3 Series in Russia. The work is done by our favorite mechanic Arthur Tussik, who is once again giving a crashed premium car a new life.

This Bavarian sedan has a frontal collision and light damage at the back. The first task for Tussik is to restore the shape of the engine bay by pulling the left rail with a hydraulic press. Then, the most damaged parts are replaced with components from a donor car.

Once the position of the shock absorber support is correctly fixed, it’s time for the new part of the frame to be installed. After that, an anti-corrosion treatment is applied followed by a new paint for the parts from the donor car. 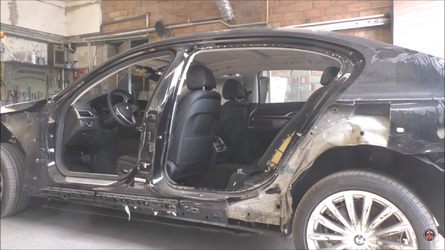 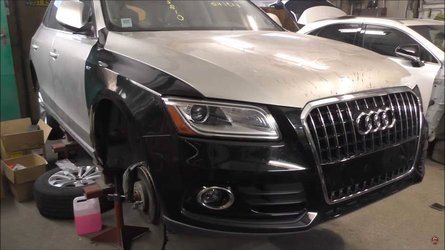 The engine bay is now in good shape, so it’s time for Arthur to fix the damaged rear quarter panel. This time he uses a brand new replacement panel as BMW is apparently selling these components from the factory. After pulling the rear frame to the correct angle, he is then removing the damaged panel and preparing the new piece for installation. Once that detail is installed, it’s welded into the cell that supports it and a final inspection of the gaps is done.

Before going to the paint shop, the 3 Series gets all its body components installed and gaps inspected. The engine is still not in the car, but it will be put back once the bodywork is complete. Probably the most satisfying part of the video comes when Arthur starts to assemble all the removed parts from the body. It seems like he was given some upgraded components from the M Performance portfolio, including the taillights, wheels, side skirts, and bumpers.