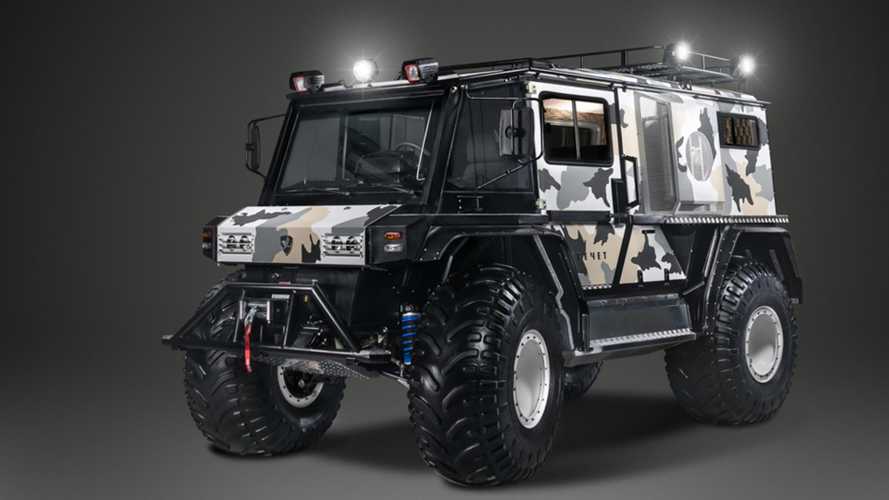 The Hyundai-sourced turbodiesel hides underneath a panel below the second-row seat.

Need to journey into the wilderness but don't like the usual Jeep Wranglers, Toyota Land Cruisers, or similarly well-established off-roaders, then Russia's Technoimpluse might have what you need. The company's Rocket Z 210-91 is a mid-engined SUV that can seat as many as nine people, and it's ready to go anywhere. Prices start at 5.6 million rubles ($84,784 at current exchange rates).

The boxy SUV uses a Hyundai-sourced 2.5-liter four-cylinder turbodiesel available with either 82 horsepower (61 kilowatts) and 145 pound-feet (196 Newton-meters) or 99 hp (74 kW) and 170 lb-ft (230 Nm). Regardless of tune, the mill hooks up to a five-speed manual. Two 26.42-gallon (100-liter) fuel tanks should allow for plenty of range. When dealing with harsh terrain, there's a full-time four-wheel-drive system, locking differentials, and a two-speed transfer case to engage lower ratio gearing. Power steering makes driving a little easier, too. Flat tires aren't a huge concern, either, because there's an onboard inflation system.

Inside, there's a rather odd seating layout. The driver seat is the only permanent chair up front, but there is a deployable jumpseat in case the pilot needs some company. The next row is a simple bench seat, and it folds out of the way for access to the hatch that conceals the engine. A pair of wall-mounted seats are at the very back, and they can tilt down to make the entire rear into a sleeping area.

Technoimpluse seems to have military aspirations for the Rocket Z 210-91 because the company's website says the machine is well-suited for border patrols and the protection of natural resources. If this model isn't big enough, the automaker also offers the even larger Rocket Z 310-91 with a 6x6 layout.