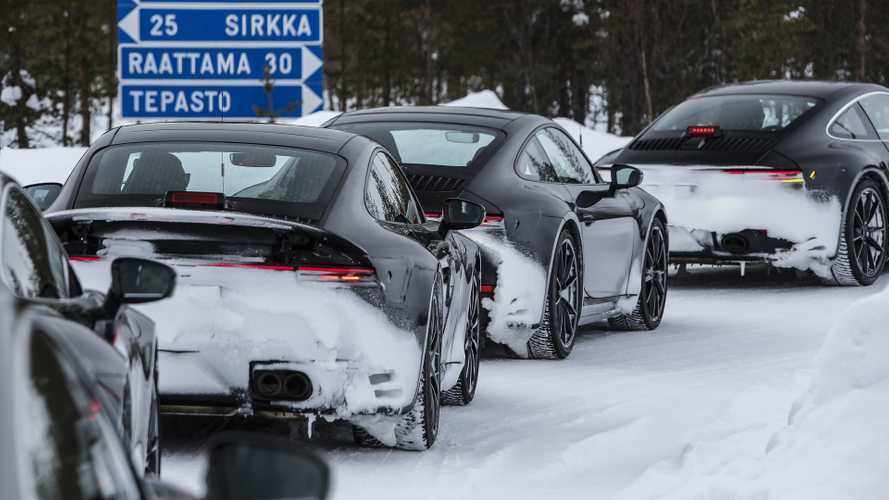 The cat’s pretty much out of the bag when it comes to the next generation Porsche 911 with recent spy photos revealing 99 percent of the exterior. We even drove a prototype of the vehicle, which was confirmed to debut in its full glory at the upcoming Los Angeles Auto Show in late November.

The German sports car maker will be using the last three weeks before the debut to prepare its fans for the grand premiere and it has just started the teaser campaign. November 5th brings us first “official” spy photos taken during the 911’s lengthy testing program as an official preview of the model.

Porsche is proud to announce it is “putting the new sports cars under a great deal of stress” and is evaluating it in different climate zones with temperature amplitude of up to 185 degrees Fahrenheit (85 degrees Celsius) and elevation changes spanning more than 2.5 miles (4 kilometers). The automaker wants to make sure every component of the car functions just as reliably as it did at the beginning of the testing program.

“In addition to its outstanding performance, it’s the 911’s suitability for daily use that has always put it in a class of its own,” Andreas Pröbstle, Project Manager for the new 911, comments. “That’s why we test the vehicle under all conditions, and in every type of weather and region. The vehicles’ drivetrain must function as flawlessly as its fluids, systems, operating processes and displays – it’s the only way we can be certain that the vehicle is able to travel through all regions of the world without faults.”

Prototypes of the new 911 are also regular visitors at the Nurburgring (and we’ve spied many of them), where the engine, transmission, brakes, and chassis are put to their limits and even above to prove their mettle. Several prototypes were driven around the Nardo track in Italy too, where “the focus is not only on top speed but also cooling and handling.”

Check out the press release section below for more info.

Stuttgart. The home straight for the new Porsche 911: the eighth generation of the sports car classic will come to European market at the beginning of 2019. In advance of this, the prototypes are revving up their engines again, to complete the final testing programme around the globe – putting the new sports cars under a great deal of stress. They are shuttling between climate zones with temperature differences of up to 85 degrees Celsius; sprinting across elevation changes spanning more than four kilometres; enduring traffic jams in major cities and setting new records on the racetracks. After all of this, every component of the car must function just as reliably as it did at the outset.

“In addition to its outstanding performance, it’s the 911’s suitability for daily use that has always put it in a class of its own,” comments Andreas Pröbstle, Project Manager for the Complete Vehicle of the 911. “That’s why we test the vehicle under all conditions, and in every type of weather and region. The vehicles’ drivetrain must function as flawlessly as its fluids, systems, operating processes and displays – it’s the only way we can be certain that the vehicle is able to travel through all regions of the world without faults,” he adds.

The testing first focuses on Porsche’s traditional core areas of expertise, such as the chassis and engine, which have been enhanced even further to heighten both performance and everyday use. Additionally, there are function tests and stress tests for the entirely new operating concept in the cockpit, as well as instruments and displays. The new driver assistance systems and extended connectivity must also rise to the challenges of the strenuous testing marathon: Porsche Connect differs from country to country, so testing its operation and functions is very resource-intensive.

In hot countries such as the Gulf States in the Middle East or Death Valley in the USA, the air conditioning, thermal management, and combustion behaviour need to pass functional tests in temperatures up to 50 degrees Celsius – so the interior components must not expand or contract and make noises when exposed to heat, for example. In Finland’s minus 35 degrees temperatures, the test agenda focuses on areas such as cold start, heating and air conditioning, traction, handling and braking behaviour, as well as the response speed of the control systems related to driving dynamics. The winding and demanding roads in the area of the European Arctic Circle offer optimum conditions for testing a sports car, while endurance runs have seen the new 911 test cars sprinting over China’s roads and racing tracks in a traffic structure that is typical for that country, as well as proving that they run reliably on fuels whose qualities vary enormously.

The Nuerburgring is traditionally a part of the rigorous Porsche test and development programme. The engine, transmission, brakes and chassis must prove their mettle at the demanding racetrack located in the Eifel mountain region. In Italy, the test cars are driven round the high-speed Nardò test tracks, where the focus is not only on top speed but also cooling and handling. The test vehicles reach the lowest point of their endurance run in Death Valley, which descends to around 90 metres below sea level; while the thin air on Mount Evans, Colorado – reaching heights of 4,300 metres – was the challenge for the biturbo charging and the fuel system. By the time, testing is complete, the cars have been driven around three million kilometres in total.

A less spectacular component of testing, albeit no less important, is customer-oriented everyday testing on public roads in cities and cross-country throughout Germany. This portion of testing also sees significant mileage being covered, while complying with all traffic rules, in order to ensure that the complete vehicle and its systems are durable and suitable for daily use, so that the eighth generation of this sports car icon continues the tradition of being the best 911 of all time.