ABT Extracts More Diesel Power From The Audi Q8

Who said diesels are dead?

Whether it’s black, white, green or purple, the Audi Q8 stands out from the SUV crowd with its new-era design language and rakish roofline. The TDI badge at the back is not exactly future-proof, but that doesn’t mean diesel engines will be retired from the market anytime soon. ABT, one of the first tuners to take a stab at tweaking Ingolstadt’s flagship SUV, knows there’s still significant demand for diesel engines in Europe, hence why it has decided to upgrade the “50 TDI” version.

Gallery: Audi Q8 by ABT

See our review of the standard Q8 50 TDI: 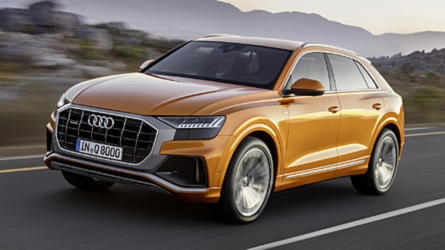 The Bavarian tuner doesn’t speak about the SUV’s performances with the newly gained muscle, but it goes without saying it’s faster than the stock Q8. As a reminder, the 50 TDI variant needs 6.3 seconds to complete the 0-62 mph (0-100 kph) task and tops out at 152 mph (245 kph).

ABT has also made some discreet styling modifications by removing the stock wheels to make room for one of their 22-inch sets available in a couple of finishes with polished double spokes or a glossy look.

This sinister Q8 is only a taste of things to come as pretty soon it will be fitted with a full aerodynamic package for those who feel like the standard Audi look just doesn’t cut it.

If you want a hotter Q8 straight from Bratislava, Slovakia where the SUV is produced, you’ll be happy to hear Audi is working on not one, but two performance versions: SQ8 and RS Q8.