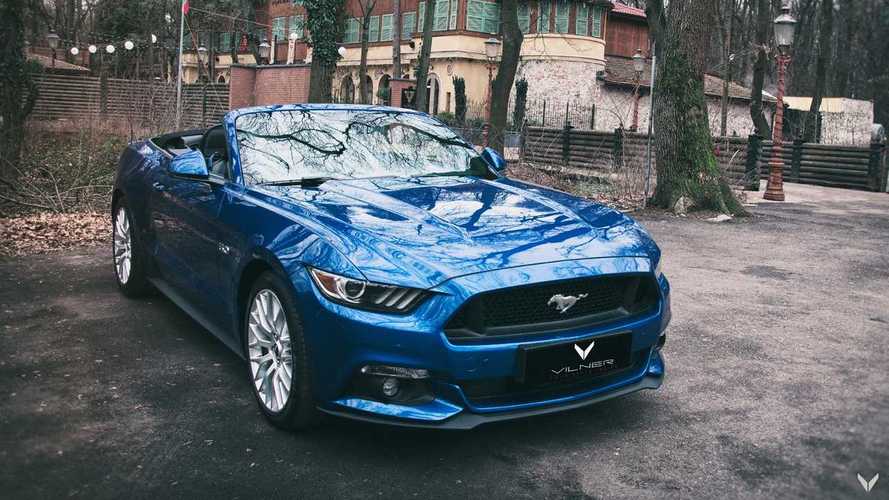 Lots of leather and Alcantara give these old horses a new saddle.

While SEMA is heating up the aftermarket car scene in Las Vegas, Bulgaria's Vilner shows that Europeans understand car modding, too, by overhauling the interior of a pair of 2015 Mustang GT Convertibles. "Of course, there is an obvious reason for us showing you two projects based on the same model, side by side. It’s a showcase of our different stages of personalization,” company boss Atanas Vilner said about the new creations.

The Mustang with the entirely blue exterior has the lower level of cabin upgrades. Vilner wraps the dashboard in black leather with contrasting white stitching and strips of cobalt-colored Alcantara to match the exterior. The fake suede also wraps around the rearview mirror. Vilner keeps this blue-and-black scheme going throughout the rest of the interior, including the door panels.

Check out some of the Mustangs at SEMA:

A droptop Mustang with a blue body and white stripes has more intricate revisions to the cabin. Vilner uses a tri-color red, white, and black color scheme for the car that creates quite an eye-catching appearance. The door panels and seats feature contrasting strips in these shades, including white stitching to provide an additional visual flourish. Vilner keeps things relatively simple on the dashboard and center stack by only using black and red on them, but the center console lid is in vibrant white.

Whether or not these Mustangs fit your style, they're still preferable to one of Vilner's earlier pony cars that uses actual ponies for the upholstery. In 2017, a customer in China ordered the bespoke car with horse leather upholstery, including sections of the animal's hair adorning the sides of the seats. Vilner admitted the vehicle was controversial, but it was specifically what the client asked for.

The latest project by Vilner Garage is actually composed by two ‘elements’, a pair of two blue 2015 Ford Mustang GT Convertible’s. Their concepts though are quite different.

“Of course, there is an obvious reason for us showing you two projects based on the same model, side by side. It’s a showcase of our different stages of personalization,” says Atanas Vilner which leads his atelier for more than 20 years now.

Good move from Vilner Garage, a move which brightens up two aspects of their work: first, that even some small changes of small details, done the right way on the right places, can make quite a big difference in the way how a car’s interior feels like. And second – that the stage of personalization only depends form the client’s whishes and the sky is the limit.

The way that two cars feels now? On another level, both of them, in terms of looks, quality and overall feeling. Vilner Garage has spent vast amounts of fine leather and Alcantara. Combination of materials which wraps almost all (depends of which care you’re looking) the scratchy plastic inside, converting it into some noble feeling surfaces, both on touch and look. A hallmark: embroidered‘Mustang’ logo, galloping on the door covers and carpets.

On both cars: the steering wheel is a piece of art. Two types of leather for the ring, Alcantara for the center bit and ‘racing style’ central marker on the highest point. You can see a high quality ‘V’ logo badge on the bottom of the wheel (the ‘non striped ‘Stang’) and scaled down continuationof the exterior stripes to the steering wheel and seats of the striped car.

“Personalizing a vehicle is not a rocket science when your budget is unlimited. But when it comes to x amount of resources, and that x is a small one… here is where the atelier’s art of imagination and craftsmanship becomes obvious,” summarizesAtanas Vilner.