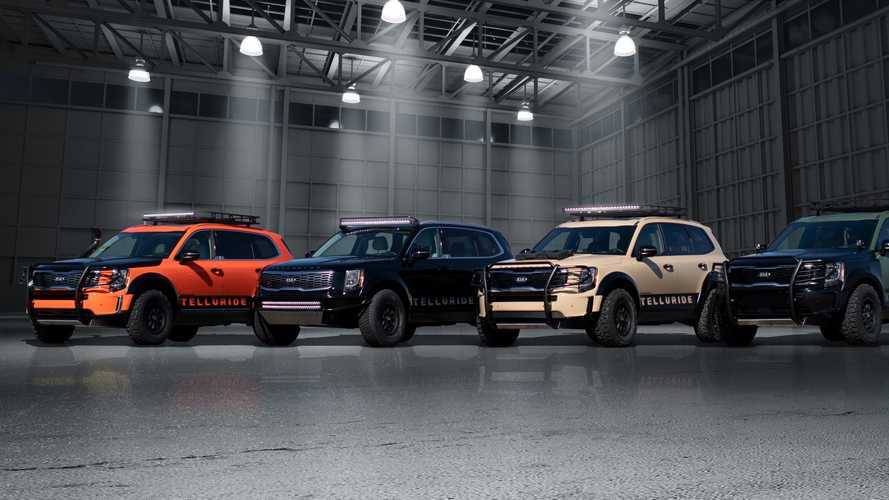 The three-row Kia Telluride made its Texas-sized debut at New York Fashion Week in September. But now the company is rolling out a quartet of new concepts at the 2018 SEMA show in Las Vegas – each one of them built for the tough stuff.

Step aside, Jeep Wrangler – Kia is readying its new Telluride for the Rubicon trail. The first of four concepts, the Horizon Roamer, comes with a bunch of hardcore off-road accessories. Up front, there’s a custom brush guard and skid plate, a straight-pipe exhaust is located in the rear, and a snorkel assures some deep water fording. The concept rides on a set of Black Rhino 32-inch wheels. Frankly put, this Telluride can take on anything.

The Telluride Cadet Leader concept is just as capable as the Horizon Roamer. Distinguished by a unique army green and matte black paint job, the rugged SUV also rides on a set of Black Rhino 32-inch wheels with Milestar Patagonia mud terrain tires, and boasts a number off-road accents. Things like a brush guard with a skid plate, a rear tube bumper with a skid plate, and a modified straight pipe exhaust come on the Cadet.

While the first two Telluride concepts were built for conquering trails, the Desert Drifter is more at home – you guessed it – in the desert. With a unique military tan and black paint job and hood-mounted rotopacks, it rides on a set of Black Rhino 32-inch wheels with Milestar Patagonia mud terrain tires.

Last but certainly not least, the Kia Telluride Baja Glider borrows some cues from the desert drifter, but tacks on a number of unique features. A deep black paint job and a curved LED light bar distinguish this concept from the rest of the crop. But like the others, it wears the same set of Black Rhino 32-inch wheels wrapped in Milestar Patagonia mud terrain tires.

Following the surprising appearance of Kia’s newest SUV, the upcoming Telluride, at this year’s New York Fashion Week9, the brand known for taking chances returns to SEMA with an outdoor activation that’s bigger and better than ever, eclipsing Kia’s 2017 SEMA drifting experience. Designed as a thrill ride for those brave enough to jump into the passenger seats of four highly-modified Tellurides, Kia’s 2018 “Torque Track,” located just outside the sprawling Las Vegas Convention Center (Orange lot), promises to leave a lasting impression and will be running through Thursday. The custom off-road course puts these Tellurides through their paces, including a jump, mountain climb and water incursion - all showcasing their off-roading potential. Meanwhile, back by popular demand, professional Formula Drift drivers will provide ride-alongs, granting those with an adrenaline addiction the opportunity to be pinned against Stinger GT’s race-inspired seats. Drivers will effortlessly slide customized Stinger GTs around corners and launch the cars from 0-to-60 mph before bringing them to a full stop with the vehicles’ high-performance Brembo brakes.

“We surprised everyone with Telluride’s special appearance in New York earlier this year; we showed its stylish swagger on a fashion runway and now at SEMA we are showcasing the vehicle’s more rugged side,” said Saad Chehab, Vice President, Marketing Communications, Kia Motors America. “Of course a production Telluride won’t be able to fly over extreme jumps like these modified versions, but we want the SEMA attendees to get to know Kia as the youthful brand we are and we think the Torque Track does that in a very special way.”

Kia partnered with LGE-CTS Motorsports to conceive the four special-built Tellurides and each vehicle has its own distinctive design and style. Themed after different off-road environments, all four are powered by a stout V6 engine with all-wheel drive. The interiors showcase Telluride’s exquisite materials and craftsmanship and offer a quiet respite from the hectic SEMA show experience. Set to debut in its production form at the upcoming 2019 North American International Auto Show, the 8-occupant Telluride is planned to go on sale in the U.S. in the first half of next year.