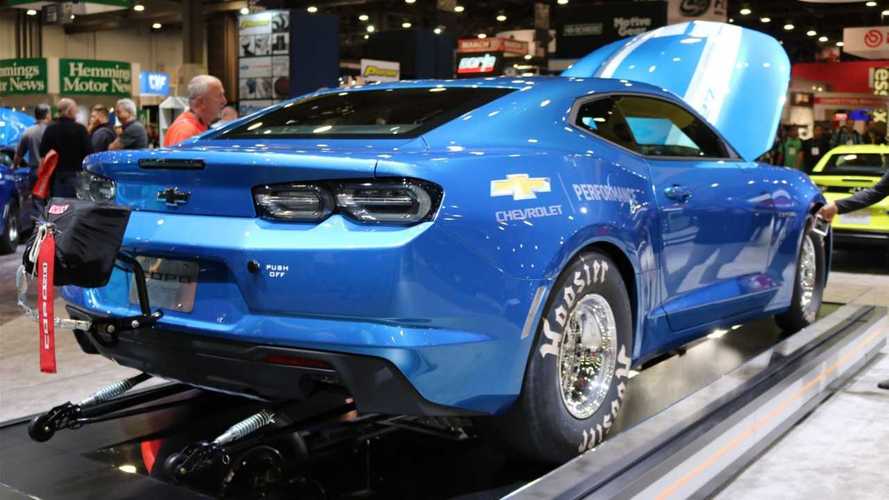 Aside from looking into the future of drag racing with a rather interesting all-electric COPO Camaro, Chevrolet is also revisiting the past for this week’s SEMA show in Las Vegas. The car that laid the foundation for the Central Office Production Order has now served as inspiration for a retro-flavored 2019 COPO Camaro. For the 50th anniversary, the race car built specifically for the drag strip is being painted in an Anniversary Blue Metallic shade as a nod to the original car’s Laguna Blue color offered back in 1969.

The vibrant color is part of a 50th Anniversary Special Edition package Chevy will offer for the 2019 COPO Camaro. It can be complemented by an optional 50th Anniversary Engine Appearance Package mimicking the design of vintage performance engines from the bowtie company, complete with an orange engine block, black high-rise intake manifold, and chrome valve covers.

Here's what Chevy is bringing to SEMA this year:

2019 Chevy Camaro Gets A Shocking Makeover For SEMA

To further strengthen the tie-up with the race car from half a century ago, Chevy will only make 69 examples of the latest version – the same number of vehicles built back then.

It's worth mentioning the 2019 model year also includes some mechanical changes as the supercharged LSX-based 350 engine is now equipped with a 2.65-liter Magnuson supercharger and has a 302-cubic-inch (4.9-liter) V8 displacement.

Camaro fans will probably immediately notice the 2019 COPO version has a different design of the front fascia not currently available for the regular street-legal models. However, we’ve seen this design already on the SEMA-bound Camaro SS finished in the new “Shock” paint. It’s widely believed the switch to the 2020 model year will bring this updated mug for the SS trim.