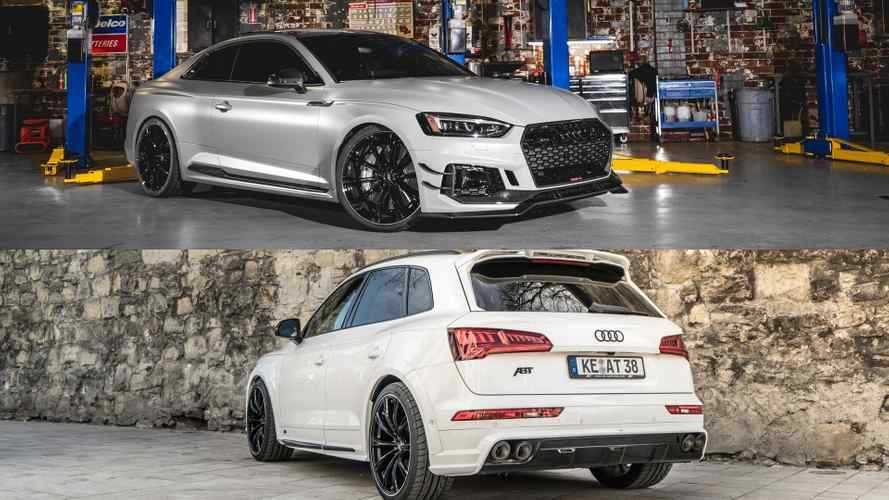 Big wheels and more power for the two Audis.

SEMA is kicking off today and the tuners at ABT have their own booth at the Las Vegas Convention Center to showcase two Audi models that have gone through a full aftermarket makeover. Brought to you by the same talented folks behind the 1,018-horsepower RS6 Avant hybrid, these two cars feature all the upgrades you can think of, including large wheels measuring 22 inches for the SQ5 and 21 inches for the RS5 Coupe.

Starting off with the performance SUV, the high-riding model from Ingolstadt has received a widebody package that includes everything from front and rear skirts to a fairly large wing and a custom exhaust system. The latter can be had with either black chrome or carbon fiber tips and will provide a more appealing soundtrack.

From Germany to Las Vegas:

Volkswagen Trotting Out Trio Of Tuned Jettas At SEMA

The other car ABT has on display at this year’s SEMA is the RS5-R, one of the only 50 examples ever built. Finished in a lovely matte Nardo Grey paint, the amped-up coupe has received an assortment of carbon fiber bits, including the quad exhaust tips. New from ABT for the RS5 are height-adjustable suspension springs and anti-roll bars, while a full coilover suspension can be ordered as well.

The German tuner will have the two cars on display at SEMA until Friday, November 2.