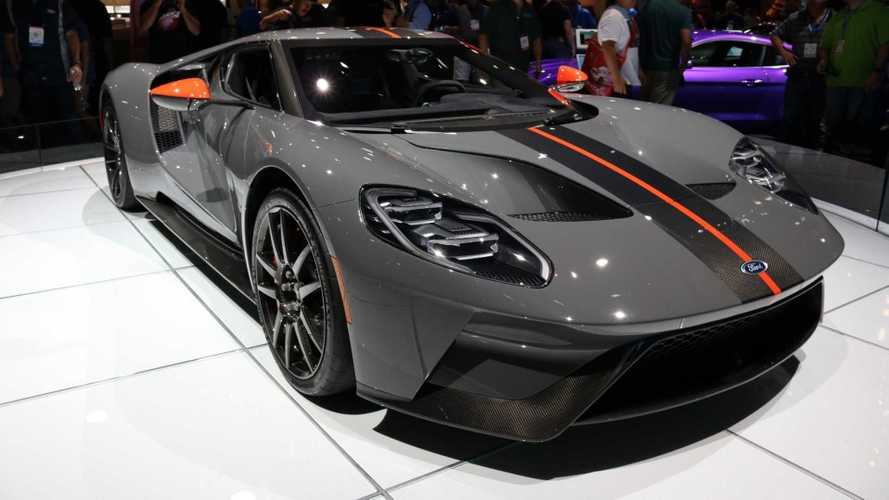 The lightest GT ever, the Carbon Series is available for pre-approved customers.

After a bumpy start for the second-generation Ford GT, production at the Ontario, Canada, plant has finally steadied to the originally planned one-car-a-day rate. This parlayed into the recent announcement that production will extend through 2022 (from 2020) to accommodate 350 more orders (from 1,000). The Blue Oval, it seems, has found its supercar-building groove.

Adding to that ambition is today’s SEMA Show unveiling of the new 2019 Ford GT Carbon Series. Of course, referring to carbon fiber, which is more visibly utilized throughout the vehicle than in any other GT, including the wheels, this specialer-edition car weighs 40 pounds less than the already special GT. This subsequently dethrones the Competition Series for the title of lightest Ford GT in the current lineup.

Other lightweight innovations include the use of titanium for the exhaust and lug nuts as well as polycarbonate for the engine cover and rear hatch. Additionally, Ford ditched conveniences like cupholders and a driver’s side seat storage bin. The Ford GT Carbon Series is not intended to be a track-only car, however, as creature comforts such as air conditioning, a radio, and the Sync 3 infotainment system remain to make this latest special-edition GT a livable everyday commuter.

“The Ford GT Carbon Series stands out on the road with its striking carbon fiber-rich design and on the track with its athleticism,” says Hermann Salenbauch, global director, Ford Performance. “It is yet another example of how we can bring to life our Le Mans-winning supercar in new and exciting ways so our customers can share in that magical legacy.”

Adds Lance Mosely, marketing manager, Ford Performance: “This is just another example of how we listen to our customers at Ford. While the Ford GT Competition model appeals to hardcore racing enthusiasts, we found more customers asking for more exposed carbon fiber with the air conditioning and radio still intact. So, we developed the Carbon Series to satisfy that need, while providing a distinct look.”

The Ford GT Carbon Series will feature a unique badge for the instrument cluster, clear anodized paddle shifters, and an exclusive seat pattern with silver stitching that also continues into the steering wheel design.

The GT Carbon Series will account for one of the seven GTs Ford will build each week going forward. It’s available to order now for pre-approved customers but will also be available to new customers in select global markets, including the U.S., when the application process reopens on November 8.