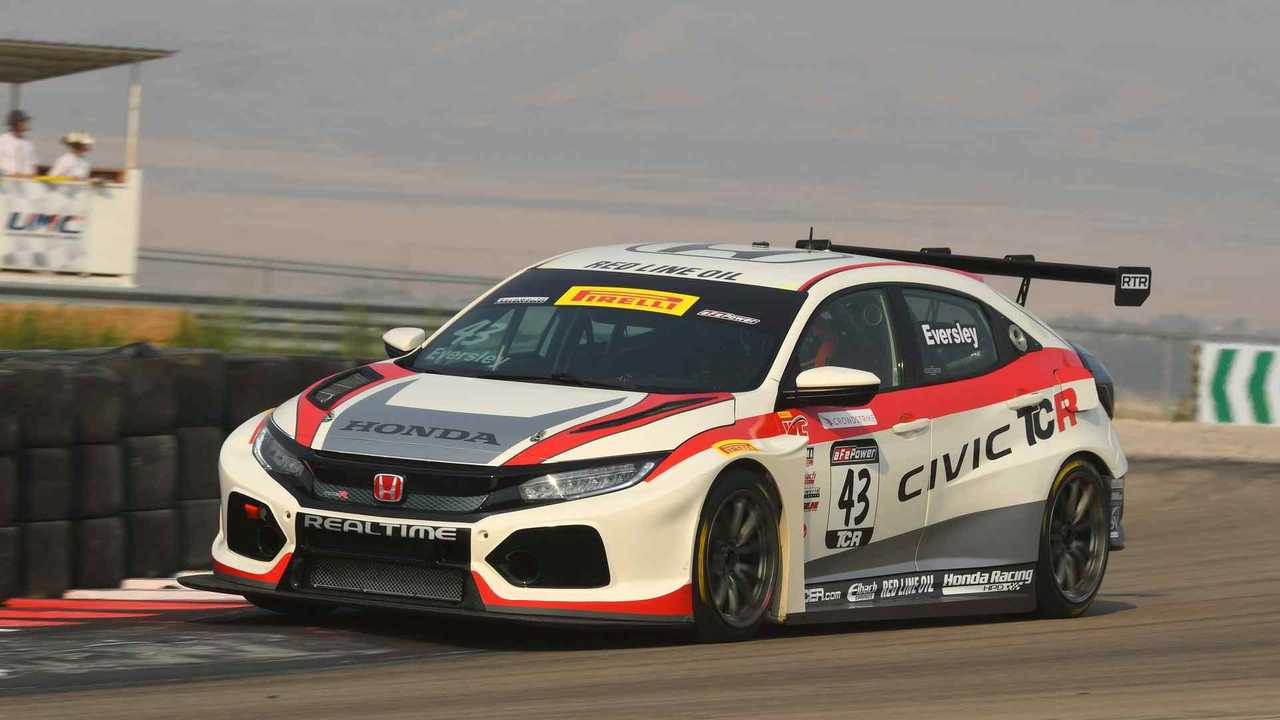 Civic Type R Racers, a rally Pilot, Ridgeline camper, and an open-air concept are only part of the display.

Earlier in the month, Honda gave us a preview of what it was bringing to Las Vegas for this year’s SEMA extravaganza. In short, the Japanese automaker’s display will be chock full of cars, trucks, motorcycles, and accessories galore. For our purposes, we’ll focus on the four-wheeled items of interest and there’s plenty to talk about – from a rally-bred SUV to a plethora of tarmac racing machines and an as-yet-unknown “ rugged open-air vehicle concept” that will officially debut on October 30. We will of course update this post when that happens so you won’t miss a thing.

The must-read guide for this year's SEMA Show:

We do have information on a couple off-roaders. The Honda Pilot Rebelle Rally is a slightly tweaked 2019 Pilot that just wrapped up a weekend competing in the 1,700-mile Rebelle Rally; an all-female event held in the deserts of Nevada and California. Adorned with skid plates, chunky off-road tires, and riding taller with extra ground clearance, the SUV was otherwise completely stock.

Also for off-road fans – especially those interested in camping, is the Honda Ridgeline Overland Project. Like the Pilot, it receives skid plates and meaty tires along with a leveling kit to keep things nice and even. That’s important, because this Ridgeline also gets a new Plateau roof rack system with a Mesa bed rack for extended off-grid camping. Various accessories help make that happen, including the requisite Honda generator for electricity in remote locations.

Speaking of electricity, the automaker will showcase a new Insight hybrid packed to the gills with official Honda accessories that can be purchased and installed through dealers. The goal is to show potential buyers that hybrids are also worthy of customization and personalization, and as such this SEMA car gets special interior lighting, 17-inch SBK wheels, additional bumper trim, and fog lights for a sportier look.

Get your Honda fix at SEMA:

A pair of Honda Civic race cars will showcase the manufacturer’s on-track performance cred, starting with the Civic Type R TCR that debuted last year. The dedicated racer had a very impressive first season, taking five wins and scoring podium finishes in 11 out of 12 races. That’s due in part to the 340-horsepower version of the Type R’s 2.0-liter four-cylinder, connected to a six-speed sequential box with race upgrades for brakes and suspension as well. Not to be outdone is the THR-W Civic Type R, which will also be on display with its 380-horsepower engine, race-prepped suspension, and big aero kit. A Type R-powered Formula 3 car rounds out the automaker’s tarmac-shredding vehicles at SEMA.

These vehicles join numerous motorcycles, a cool Honda pedal car for kids, and the aforementioned concept in the manufacturer's sizable display area. We will have more on the concept vehicle when it's unveiled on October 30.

If Las Vegas is a city where anything goes, then the wild-looking Honda Rugged Open Air Vehicle Concept will fit right in. Joining the radical headlining vehicle, Honda's other products on display will reinforce its commitment to on-road and off-road performance enthusiasts. Roadracing fans will get a thrill from the Honda Civic Type R TCR race car on display, recently driven by Ryan Eversley to Honda's inaugural TCR Championship in the Pirelli World Challenge series. Off-road fans can take in the 2019 Honda Pilot recently driven more than 1,700 miles through the Nevada and California deserts during the Rebelle Rally. Also on display will be a fully accessorized 2019 Honda Insight, the Honda Ridgeline Overland Expedition, four motorcycles from Honda Powersports including the 2019 model year rebirth of the iconic Super Cub and Monkey and, for Honda's youngest enthusiasts, the First Honda pedal car.

Honda Rugged Open Air Vehicle Concept
For information about this unique concept vehicle, attend the Honda press conference at 1:30 p.m. on Oct. 30 at booth 24887 in the south-west corner of the Las Vegas Convention Center's Central Hall. Or, visit hondanews.com at the same time where a press release, images and video will be available for viewing and download.

Honda Civic Type R TCR
Honda driver Ryan Eversley piloted this Honda Civic Type R TCR with RealTime Racing to the inaugural TCR Championship in the Pirelli World Challenge series this year. Eversley and his Honda Civic Type R TCR dominated the series with five wins and 11 podium finishes in the 12-race season. Based on the immensely popular Honda Civic Type R, the TCR version boasts numerous upgrades, resulting in 340 horsepower from the 2.0-liter turbocharged 4-cylinder. The Type R TCR also features a sequential 6-speed manual gearbox with a JAS twin-disc sintered-metallic clutch and paddle shifters. Other race-only modifications were made for safety considerations and to suspension and brake components to turn the already impressive Civic Type R into an all-out racecar.

F3 Americas Race Car
Powered by a special version of the Civic Type R's 2.0-liter DOHC VTEC® Turbo engine, Kyle Kirkwood has driven his Abel Motorsports Liger Crawford JS to the winner's circle in almost every race this season. The Formula 3 America series follows on from the Formula 4 United States Championship, allowing competitors and other aspiring racers the next level of open-wheel competition. Combining affordability, modern technology, and the ability to obtain FIA Super License points, the F3 Americas series aligns with the global FIA development ladder philosophy of using common components to provide a cost-efficient, reliable, and powerful racing structure as drivers ascend through the levels on their way to North American, or Global, racing success.

Honda Pilot Rebelle Rally
Honda R&D Americas (HRA) associates Ariel Jen and Melanie Morimoto recently completed the Rebelle Rally in this lightly modified 2019 Honda Pilot SUV. The all-women navigation rally runs 1,700 miles and 8-days across the deserts of California and Nevada, with driver and navigator only allowed a compass and a map as their guide. The 2019 Honda Pilot featured a stock drivetrain, using the factory engine, transmission, and i-VTM4™ all-wheel drive system for the duration of the journey. The only modifications made were for additional durability and safety performance, including custom skid plates, extra ground clearance, off-road tires, and an interior modified for additional storage of spare tires and other equipment.

Honda Ridgeline Overland Project
The Honda Ridgeline Overland Project incorporates multiple upgrades and modifications to turn the 2019 Honda Ridgeline Black Edition into the ultimate overland adventure vehicle. Working with Honda outfitter Jsport Performance Accessories, the Ridgeline Overlander's extensive modifications are meant to bolster Ridgeline's off-road and overlanding capability, without compromising its on-road comfort, and will soon be available for purchase. The additional skid plates, off-road wheels and tires, and leveling kit are all designed to help Ridgeline make the most of its i-VTM4™ four-wheel drive system when driving off-road. JSport sidesteps make it easier to access the versatile new Plateau roof rack system, while the Mesa bed rack maximizes cargo flexibility. Mounted in the Plateau roof rack is a lightweight, quiet and powerful Honda EU2200i generator for powering any electrical accessories your overland excursions require.

2019 Honda Insight
The all-new 2019 Honda Insight hybrid offers a superior driving experience, comfortable interior, and high-end looks, all while receiving up to a 55 mpg city rating1. Like all Honda products, Insight is available with a long list of dealer-installed accessories, many of which are showcased on the Insight on display this year at SEMA. Included on the Insight are various additional interior lighting, such as door sill, door panel and foot illumination for a more custom look. The display Insight also includes 17-inch SBK wheels, fog lights, front and rear chrome bumper trim, and black front bumper trim. All accessories are available from Honda dealers nationwide.

First Honda Pedal Car
Inspired by the Honda Project 2&4 concept race car shown at the 2015 Los Angeles Auto Show, the First Honda pedal car concept explores ideas to inspire kids to be enthusiasts for the Honda brand. The pedal car is compact, about 47 inches long, 24 inches high and 22 inches wide, and incorporates carbon fiber construction in its floor and rear "diffuser." Though pedal powered, the First Honda also contains a rechargeable lithium ion battery to power lights, and even recharge a cell phone in the snack compartment under the "hood." Built by Honda Accessory America, the First Honda also uses 18-inch alloy wheels from the 2017 Honda Civic Hatchback.

For more information about the full range of motorcycles, ATVs, scooters and side-by-sides, go to http://powersports.honda.com/.

For More Information
Consumer information is available at automobiles.honda.com. To join the Honda community on Facebook, visit facebook.com/honda. Additional media information including detailed pricing features and high-resolution photography of all 2018 Honda models is available at hondanews.com.

About Honda
Honda offers a full line of reliable, fuel-efficient and fun-to-drive vehicles with advanced safety technologies sold through over 1,000 independent U.S. Honda dealers. The Honda lineup includes the Fit, Civic, Insight, Accord and Clarity series passenger cars, along with the HR-V, CR-V and Pilot sport utility vehicles, the Ridgeline pickup and the Odyssey minivan.

Honda has been producing automobiles in America for more than 35 years and currently operates 19 major manufacturing facilities in North America. In 2017, more than 90 percent of all Honda brand vehicles sold in the U.S. were made in North America, using domestic and globally sourced parts.