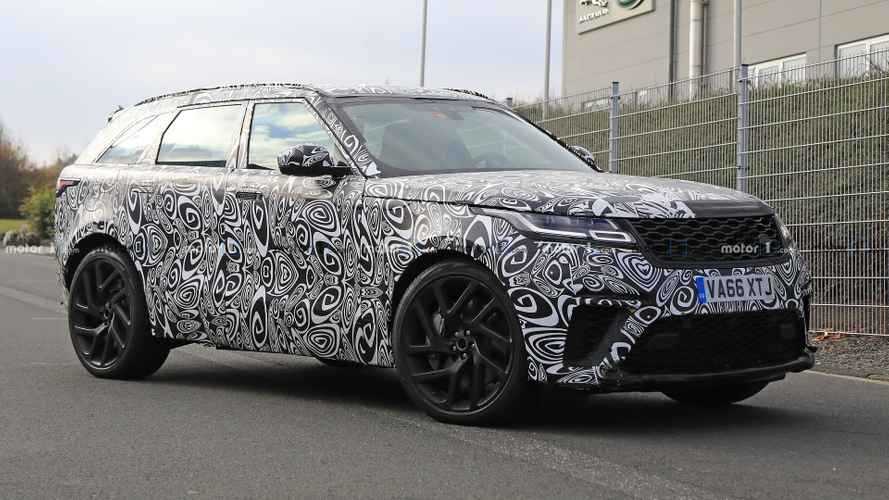 Land Rover is still working on the most potent version of the BMW X6-rivalling Range Rover Velar and a fresh new batch of photos reveals the model is almost ready to be launched. This prototype, spied somewhere near the Nurburgring, has all the production bits in place hidden underneath a thin layer of disguise.

The first thing we notice is the design of the rear diffuser which is now probably closer to its final form compared to the previous trial car spotted by a Motor1.com reader earlier this month. The absurdly massive exhaust pipes are gone and are replaced by a much more familiar quad-pipe layout with traditional round tips.

Up front, there’s still something happening with the fascia as some of its parts are taped, including the bar below the lower grille and the chrome strip in the hood. Under closer inspection, you’ll also notice the front passenger door’s handle is missing. Maybe the Velar SVR is too fast for its own good...

There’s no official confirmation as to what will power the performance SUV, but we are nearly 100 percent certain Jaguar Land Rover’s 5.0-liter supercharged V8 will be under the hood. In the Range Rover Sport SVR it produces 575 horsepower (429 kilowatts) and 516 pound-feet (700 Newton-meters) of torque, so expect similar or identical numbers for the coupe-SUV as well.

The most powerful Velar will also receive an eight-speed automatic gearbox, sending power to both axles permanently. This setup should provide 0 to 62 miles per hour (0 to 100 kilometers per hour) acceleration in around four seconds.

When is it going to debut? Word on the street is Land Rover will bring the Velar SVR to the Los Angeles Auto Show in late November, but that’s not confirmed yet. A debut during January’s 2019 NAIAS in Detroit is also possible.