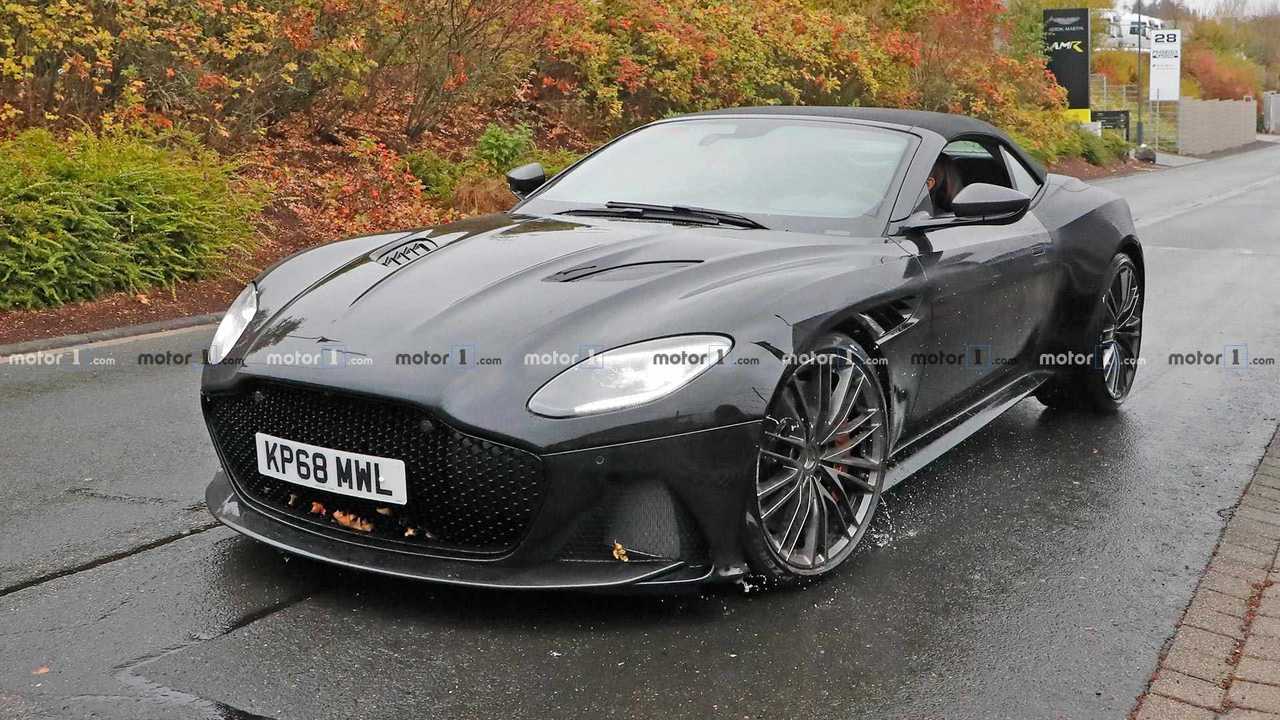 The convertible DBS Superleggera should be identical to the hardtop other than the ability to open the roof.

UPDATE: We have received 10 additional spy shots of the DBS Superleggera Volante. This time it was driving in drier conditions. The new photos are the first images in the gallery below. Source: Automedia.

A rainy, autumn day seems like some of the worst possible weather to take a droptop Aston Martin for a drive, but this black DBS Superleggera Volante test mule still looks cool, despite the poor climate. Best of all, this prototype doesn't appear to wear any camouflage, so there's no guessing about what the upcoming open-roofed grand tourer looks like.

Coupe gets a special edition:

The DBS Superleggera Volante's soft top actually looks quite a bit like the coupe's fixed roof by maintaining the body's sleek shape. One tiny change is that the view out of the rear appears more constrained because of the smaller opening back there on the droptop. While not visible in action here, there's an active rear spoiler that pops up as the vehicle's speed increases.

Take a closer look at the convertible DBS Superleggera:

Mechanically, the coupe and convertible will likely be identical. A 5.2-liter twin-turbo V12 will pump out 715 horsepower (533 kilowatts) and 663 pound-feet (899 Newton-meters). An eight-speed automatic will route the ample output to the rear wheels. The extra weight of the roof mechanism and slightly different aerodynamics might take a little off the hardtop's acceleration to 62 miles per hour (100 kilometers per hour) in 3.4 seconds and top speed of 211 mph (340 kph). Hitting very illegal speeds should still happen very quickly with the top down, though.

It's not yet clear when the DBS Superleggera Volante debuts. However, we expect the luxurious grand tourer to be on sale in time to enjoy prime convertible weather next summer. Pricing should be even higher than the coupe's base cost of $304,995, and Aston Martin would offer plenty of options to entice buyers to spend even more.