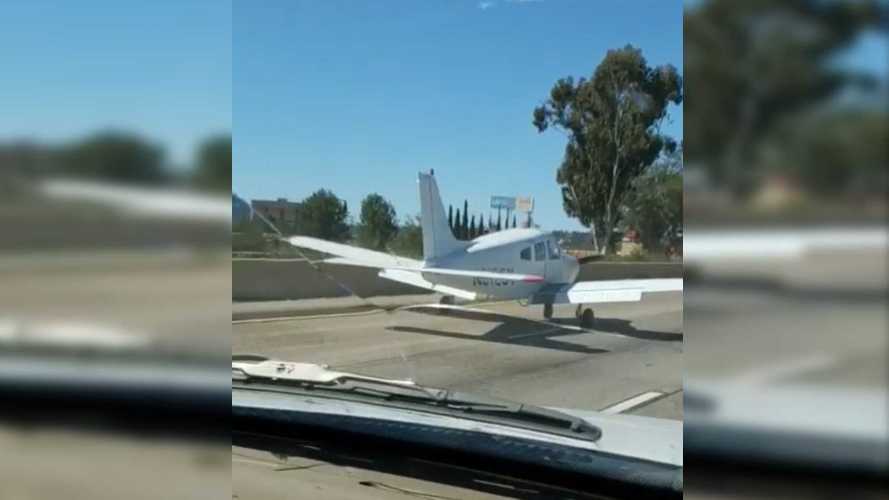 No engine? No runway? No problem.

Remember long ago when you were in driver’s training class and the teacher told you to always keep your eyes on the road? This dramatic video footage from El Cajon in Southern California proves looking up from time to time might not be a bad idea, either. A quick warning before you click play – there is some strong language in the video below but then again, if a freaking airplane was landing in front of us on a busy highway, we’d have a few choice words of our own.

Keri Decker was in the right place at the right time to capture the moments on Facebook, traveling on Interstate 8 not far from San Diego when the low-wing, single-engine airplane came into view. The video starts with the plane still in the air, touching down seconds later in a small gap between traffic before rolling to a stop in the left two lanes of the three-lane highway. The pilot expertly put the aircraft down just ahead of a pickup and a larger green commercial truck, much to the surprise of both drivers we’re certain.

Things could've been much worse:

According to The San Diego Union-Tribune, a 35-year-old student pilot was at the controls and inbound for a landing at a nearby airport when the engine lost power. The instructor pilot, 25-year-old Ryan Muno, took over and decided they couldn’t make the airfield so he lined up for a landing on westbound I-8. As the video shows, the landing was spot-on and about as smooth as any emergency touchdown can be. No cars were damaged, nobody was injured, and aside from the engine problem, the airplane was fine as well.

Honestly folks, this incident is beyond incredible, and not just because this guy expertly landed and controlled his airplane in between traffic on the highway. Dodging cars was only part of this successful maneuver. Road signs and power lines aren’t concerns for us on the ground, but they're definitely on the minds of low-flying pilots and hitting either would’ve been disastrous. Signs, light poles, and towers can be fairly easy to spot, but power lines can be almost invisible from an airplane and the pilot landed just in the nick of time, as there were wires atop the road just a bit further down. And don't forget, the engine lost power so there was only one chance to get this right.

Big time props to this instructor who kept his cool and brought that aircraft home like a boss. He can be our wingman anytime.

Best Renderings Of The Week: From Genesis Wagon To New Qashqai
Suzuki Jimny Reportedly Getting Larger, Five-Door Version
Enter To Win This Shelby GT500, F-150 Supertruck Ultimate Prize Package
Buying A Car During The Pandemic Will Get You These Great Deals
After VW And Audi, Mercedes Updates Logo To Promote Social Distancing

Best Renderings Of The Week: From Genesis Wagon To New Qashqai
Suzuki Jimny Reportedly Getting Larger, Five-Door Version
Enter To Win This Shelby GT500, F-150 Supertruck Ultimate Prize Package
Buying A Car During The Pandemic Will Get You These Great Deals
After VW And Audi, Mercedes Updates Logo To Promote Social Distancing