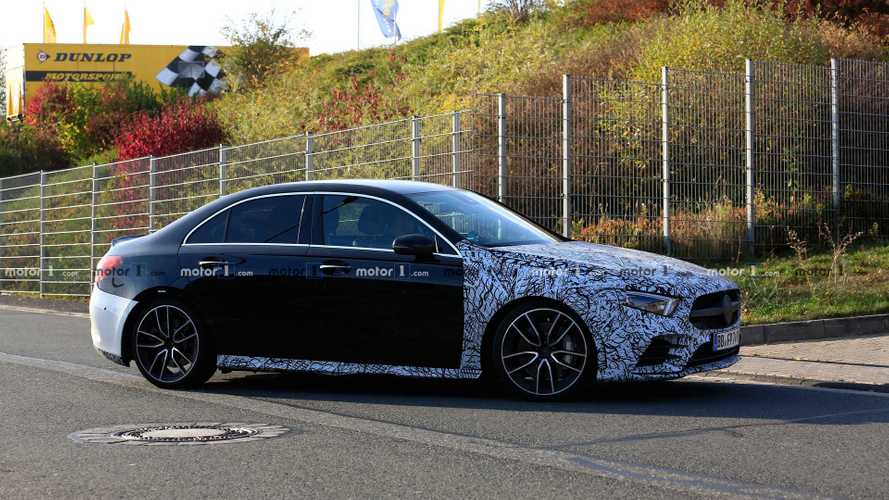 It’s only a matter of time before a new AMG animal is upon us. The hopped-up A-Class certainly isn’t a secret – the A35 hot hatch was already revealed a couple weeks ago at the Paris Motor Show. A five-door runabout isn’t everyone’s cup of tea, however, hence the sedan version. And so far it looks quite handsome indeed.

Here's the hatch doing its thing

See How The Mercedes-AMG A35 Performs In Acceleration Test

The full wrap on the front clip seems overkill at this point since the hatchback is public domain, and from what we can see the sedan’s nose should be identical. Things will be a bit more interesting around the back of course, where there are details still worth hiding. Among them, the A35’s tweaked rear fascia with side vents and the diffuser nestled down low between the dual exhaust outlets. There’s also a bit of camo along the rocker panels, suggesting the production car could have some minor changes there as well.

Inside you’ll find the same glass cockpit and all the accommodations of the hatchback, minus of course the hatch and fold-down rear seats for larger cargo capacity. The rears should still have a split function for accessing the trunk, but you won’t be hauling any appliances inside the A-Class sedan.

What you will be hauling is tail. The same 302-horsepower (225-kilowatt) turbocharged 2.0-liter four cylinder in the hatchback will power the sedan, sending its grunt to all four wheels. The transmission is also the same seven-speed dual-clutch automatic with paddle shifters. It shuffles the five-door to 60 mph in 4.7 seconds, and should do the same for the sedan.

Perhaps the most important difference between the hatchback and sedan – at least for buyers in North America – is that the sedan will be available in the U.S. starting next year. The hot hatchback remains the domain of the Euro market, which it will share with the sedan as well.

Expect Mercedes to officially announce the A35 sedan very soon.