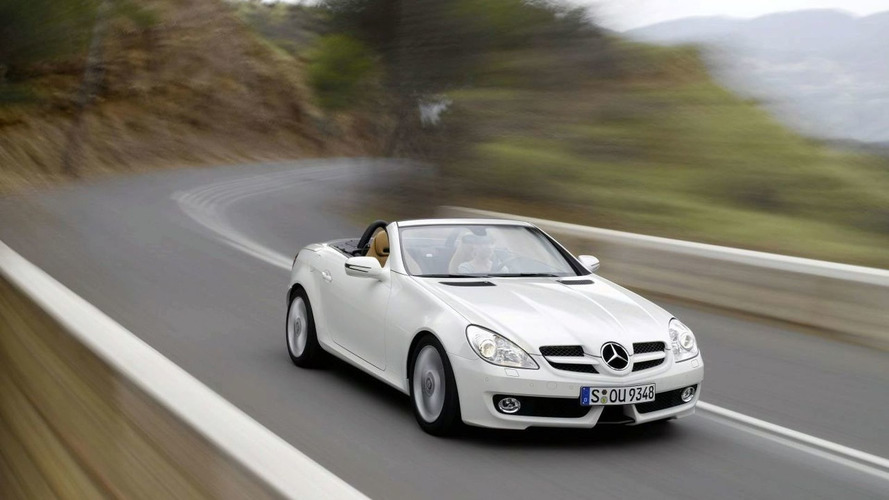 The Mercedes-Benz SLK-Class Roadsters have long captured the hearts of sports car enthusiasts. Incorporating around 650 newly developed parts, the SLK models of 2008 are even more dynamic and now offer an even more emotionally charged driving experience.

Well it turns out that the Auto Express-sourced leaked photos of the new facelifted SLK were official after all, these new shots following only hours after the apparent infiltration come viral marketing exercise. Why then, with no embargo placed upon it, the magazine have decided to take the official photos down is beyond us. But regardless, feast your eyes on the second facelifted Mercedes-Benz SLK-Class - a vehicle now more powerful, more economical and more intense than its predecessor.

With the first R171 designated platform "F1 Nose" facelift occuring in 2004, the major overhall facelift which Mercedes calls a "next-generation"  is more powerful and more economical: The new SLK introduces two uprated versions of existing powerplants. The four-cylinder supercharged unit is boosted by 21 hp to 184 hp and increases torque from 240 to 250 Nm, fuel consumption being reduced to 36.7 mpg and CO2 emissions cut by 13% to 182g/km. The SLK 280 improves fuel economy to 30.4 mpg and CO2 to 220g/km.  Unfortunately, the high-performance SLK 55 AMG remains the same and does not get upgraded to the new 6.3-liter AMG engine although it receives a few exterior body enhancements.

More intense: Designed to catch the eye, the sporty two-seater gets even sportier through the modification of the front air dam and a more refined area around a more pronounced F1 nose and grille spine. At the rear, a new lower skirt and pipe design make for a more powerful rear view, aided by the darkened AMG-style rear lamps. In the new SLK's cabin, a more driver-oriented arrangement features, introducing a new multifunctional three-spoke sports steering wheel and a new instrument cluster.

For details including an optional new direct-steer system to improve agility and boost driving pleasure, standard and optional equipment as well as precise engine performance figures, read the press release attached below. The new-generation SLK will hit UK showrooms from April, with pricing to be announced early next year.