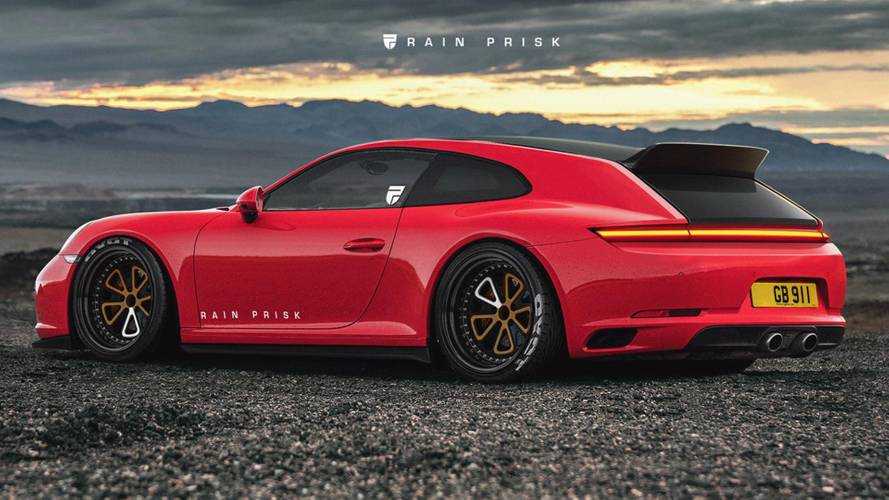 This is the Porsche 911 you could easily use every day, and you can't have it.

Porsche offers a slew of 911 variants, including a whole range of engines that buyers can slot into a coupe, convertible, or Targa bodies. There are even the occasional rare variants like the upcoming Speedster that puts a new spin on an old idea. The factory hasn't ever offered a shooting brake, two-door wagon body for the 911, but artist Rain Prisk has decided to imagine what one could look like.

Get a better look at the next Porsche 911:

Prisk keeps the 911 looking stock to the B-pillar. From there, the top remains flatter than on the existing coupe. The layout creates a low-slung hatchback with a ducktail spoiler that separates the area between the roof and the hatchback. LED taillights span the entire tail just like on the upcoming 911. Two exhaust pipes emerge from the center of the rear fascia. We would be curious to see whether the engine packaging would allow for a flat load floor.

There's no sign of a 911 shooting brake in Porsche's future product plan. So far, we have seen the coupe, convertible, GTS, GT3, and Turbo (including cabrio) variants, though.

While not available to the general public, Porsche has toyed with creating two-door wagons in the past. In 1984, the company made a one-off 928-4 shooting brake (gallery above) as a present for Ferry Porsche's 75th birthday. The model started as a contemporary 928 S but stretched the vehicle 9.8 inches (25 centimeters). Fixed headlights replaced the pop-up units. Rather than there original liftback design, there was now a hatchback. The team also raised the roof and gave the B-pillar a more upright shape. These tweaks provided more headroom and allowed for the fitment of more comfortable rear seats. The powertrain remained stock with a 5.0-liter V8 pumping out 306 horsepower (228 kilowatts).